About 700 students are still trapped in Sumi, Ukraine, India awaits the response of Russia and Ukraine 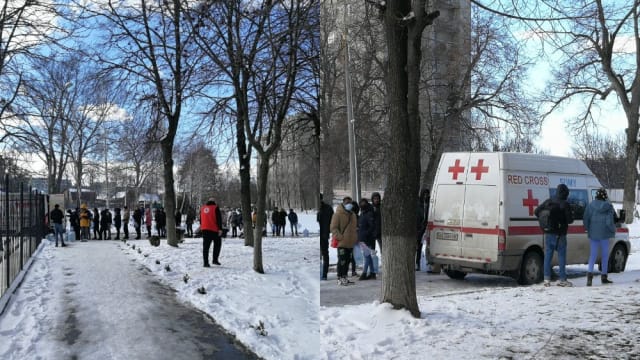 Around 700 Indian nationals are stranded in the eastern Ukrainian city of Sumy. Efforts to make arrangements for their evacuation amidst fierce fighting and shelling on Sunday met with no success.

People familiar with the matter said Indian nationals, mostly students, have all taken shelter in bunkers and on campus. There has been no response from Russia and Ukraine on India’s reply on the local ceasefire in Ukraine.

In fact, Russia and Ukraine had announced a ceasefire on Saturday. It also agreed to the evacuation of civilians by building a humanitarian corridor in Mariupol-Volnovakha. But it doesn’t seem to be of much use. Indians trapped in eastern Ukraine are unable to use these exit routes.

Earlier, about 600 Indian students of Sumi Medical University, stranded in the north-eastern state of Sumi, war-torn Ukraine, took a risk and left for the border. Before leaving the campus, these students made a video and shared it on social media. In which a student is saying, “We cannot wait any longer. We are marching towards the border with our lives at stake. If anything happens to them, the Indian government and the embassy will be responsible.”

Humanitarian assistance provided to stranded students at Sumy #Ukraine by Red Cross Ukraine in coordination with Indian World Forum. They are being provided with water and essential supplies. pic.twitter.com/U00R0dDF0M

Sumy is now the main focus of evacuation efforts in Ukraine after most civilians were evacuated from other conflict zones such as Kharkiv. The Indian Embassy in Kyiv has launched an operation to find out if there are any other Indians trapped in conflict zones or other parts of Ukraine. The embassy has sought details of any such Indian in a post on its Twitter handle.

“All Indian nationals still residing in Ukraine are requested to fill up the required details in the attached Google Form on an urgent basis,” the embassy tweeted.

In another tweet, the embassy said a group of 44 Indians, who had taken refuge in the village of Pisochin, near Kharkiv, were on their way from Lviv to the Polish border. Another group of over 150 Indians had made their way towards the Romanian border.

The Ministry of External Affairs said that 15,920 Indians have been brought back so far in 76 evacuation flights. On Saturday and Sunday, 13 flights landed in New Delhi and Mumbai, bringing back around 2,500 people.

Seven more evacuation flights are scheduled for Sunday and Monday, including an Indian Air Force C-17 heavy-lift aircraft. These flights take off from Budapest, Rizzo and Suceva. More than 21,000 Indians have left Ukraine since India issued its first travel advisory. Of these, 19,920 have reached India.

Nitish Kumar against Kejriwal’s free model, what will be the face of opposition in 2024?

Only 60% voting in the first phase, who benefits from the slowness of voters in Gujarat, who is tense?