‘After Covid, this amount of people…’: Dinesh Karthik’s message to Nagpur fans after finishing match for India goes viral – WATCH 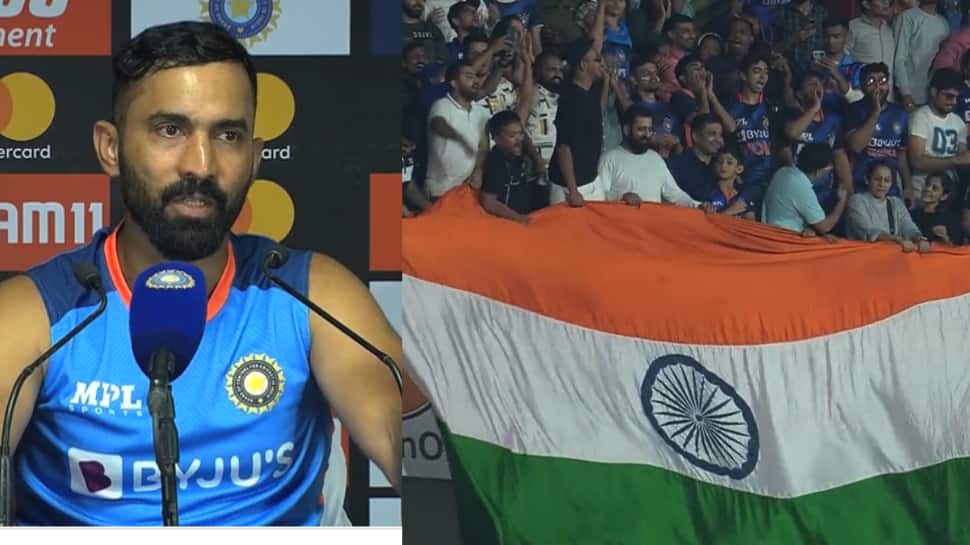 IND vs AUS 2nd T20I: Indian batter Dinesh Karthik played just 2 balls on Friday night, and on those 2 deliveries, he smashed 10 runs. These were the first 2 balls of the last over of the rain-curtailed game in Nagpur. With 9 runs needed off the last 6 balls, Dinesh Daniel Sams for a six and then finished the game with a boundary. Rohit Sharma and Karthik then celebrated the win with a hug. Post the win, Dinesh was all praise for the Nagpur fans who had come in numbers to support the team. He said that he saw this much crowd and fanfare for the first time after Covid-19 arrived in India. And the fact that fans stayed despite the rain, motivated the Men in Blue to do well.

“We were very, very keen to play for only one reason. From the time we started from the hotel, right up to the ground, there was crowd throughout, we took more time than we actually should take to reach the ground. The amount of people that were standing in the ground, we knew that it was a special occasion for us. After Covid, there have not been many situations where people have come and just been through the whole drive from the hotel to the ground,” said Karthik in the post-match press conference.

The 37-year-old added both teams showed a lot of courage to play in those conditions which were not too perfect to play the game.

“We wanted to make sure we played the game. Obviously at the start we got the feeling that it might be hard but I think both teams were courageous and kind to play the game. We both teams played for city of Nagpur. Yes, it helped us get 1-1 in the series but just to play the game for the people of Nagpur was very special,” concluded Karthik.

Watch what Karthik had to say about Nagpur crowd here.

.@DineshKarthik has a special message for the fans in Nagpur following #TeamaIndia‘s win in the 2_nd #INDvAUS T20I. __ _ pic.twitter.com/NFzmubLQwa

India play the last and decisive T20I in Hyderabad tomorrow on September 25. The series is level 1-1.