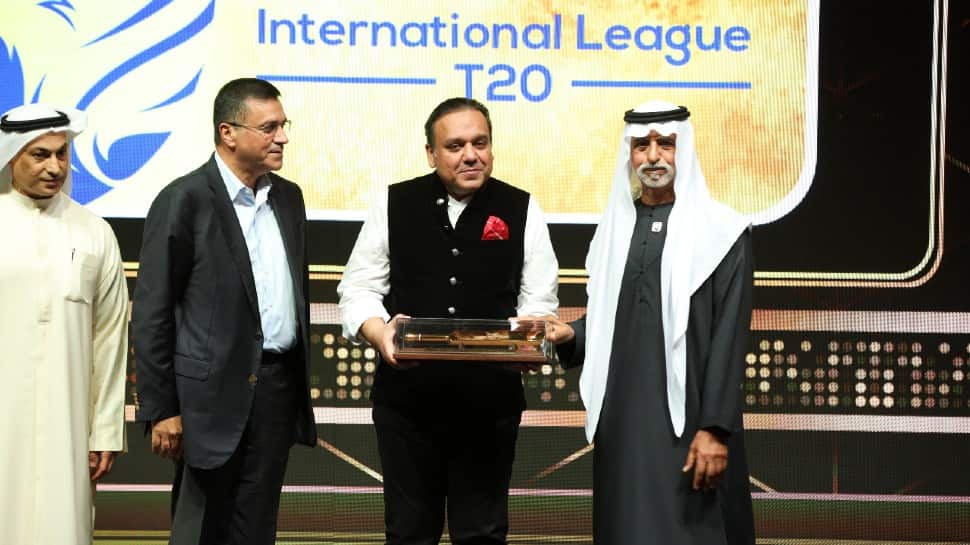 The International League T20 (ILT20) on Monday (October 10) unveiled the coveted trophy for the upcoming inaugural edition of the league, which will be held in United Arab Emirates from 13th January to 12th February 2023. His Highness Sheikh Nahayan Mabarak Al Nahayan, Minister of Tolerance and Coexistence and Chairman, Emirates Cricket Board, unveiled the uniquely-designed silver trophy, which honours UAE’s rich heritage and culture.

Talking about the trophy and the much-anticipated tournament, Rahul Johri, President – Business, ZEE Entertainment Enterprises Limited (ZEEL) said, “The unveiling of the ILT20 trophy by His Highness Sheikh Nahayan Mabarak Al Nahayan in the presence of all team owners and cricket legends marks a momentous milestone in our journey with the Emirates Cricket Board. This distinctive trophy is symbolic of the league’s unparalleled scale and ambition. We are humbled and thrilled that ILT20 is the coveted vehicle for Zee’s re-entry into sports broadcasting. We are enthused with this opportunity to entertain millions of cricket fans across India and globally on both linear television and streaming platform ZEE5.”

Can’t decide what to keep our eyes on! _

The one-of-its-kind trophy has been designed and constructed by Thomas Lyte, the world-renowned trophy makers from England. The trophy design, while reflecting upon the rich Emirati culture, takes inspiration from UAE’s majestic icon and national bird – the falcon as well as UAE’s most famous landmark, the Burj Khalifa.

The 7-pointed crown that aspires to weave together the seven Emirates (of the UAE), shaped as sand dunes inspired by the incredible sands of Tel Moreeb (Al Dhafra, Abu Dhabi) – considered to be the world’s tallest dunes, which proudly sits atop clasping a cricket ball, as the trophy’s finial. The 830mm tall trophy pays tribute to the height of the magnificent Burj Khalifa which measures 830m from ground to tip.

The 34-match event will have 6 teams competing to win the coveted ILT20 trophy. The tournament will exclusively air LIVE on ZEE’s 10 linear channels in English, Hindi, and Tamil languages as well as on its OTT platform ZEE5. The event will be broadcast on Zee Cinema (SD & HD), Zee Anmol Cinema, Zee Therai, Zee Bangla Cinema, Zee Zest (SD & HD), & Pictures HD, &Flix (SD & HD) and ZEE5 in India and globally.