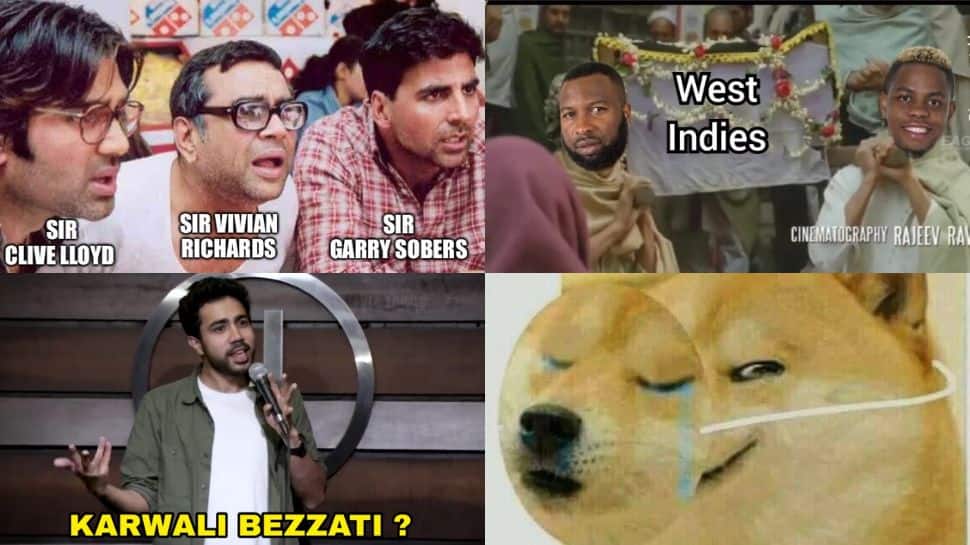 One of the biggest upsets of ICC T20 World Cup 2022 took place on Friday as Ireland thrashed two-time T20 World Cup winner West Indies cricket team faced shocking defeat against Ireland in the first round of the mega event. With this defeat, Nicholas Pooran’s side is officially out of the T20 World Cup 2022. The side earlier faced defeat against Scotland in their first match of the tournament. The star of the day for Ireland was Paul Stirling who scored a beautiful fifty while chasing a modest total of 147. He was well supported by captain Andrew Balbirnie and Lorcan Tucker.

Following the defeat, a meme battle has begun on Twitter where Shimron Hetmyer who did not feature in this WC is trending. Check a few reactions from cricket fans around the world.

I’m pleased for Ireland of course but there is something so depressing about watching the Windies get trounced _#T20worldcup22
— Annie Chave (@AnnieChave) October 21, 2022

West Indies out of T20 world cup stunned by Ireland team ,this is happen when your players play for leagues not for nation team #T20worldcup22 #T20WorldCup #T20WorldCup2022 #T20WC

2 time champions West Indies are out in the 1st round.

2-Time champions West Indies are out of the #T20WorldCup22 as Ireland seals victory over them by 9 wickets to book their place for the main event. Congrats to Ireland! ___#WIvIRE@T20WorldCup#Mustafa pic.twitter.com/nLyCVzTiVv
— Pritam Mustafa (Sahil) (@ImMustafa27) October 21, 2022

Cameron Green in Australian Side is good news for them. Very Un Aussie body language player but can be dangerous top of the order #T20worldcup22 .
— Vikram Sathaye (@vikramsathaye) October 21, 2022

West Indies officially out of the world cup.

Earlier, the West Indies set an exciting chase for Ireland after Brandon King anchored the innings to take his team to 146 at the ongoing T20 World Cup at the Bellerive Oval on Friday. Opting to bat first, the West Indies innings started with a boundary in the first over but they had their first wicket knocked out in the second. Kyle Mayers was dismissed cheaply by Barry McCarthy. The Irish bowlers kept things very tight to get one more wicket in the fifth over to restrict the the West Indies to 41/2 at the end of the powerplay. King joined Charles to steer the stuttering West-Indian innings.

Brandon King stitched a 44-run partnership with Evin Lewis for the third wicket and kept the scoreboard ticking. They took the team to 71 before losing Charles. Gareth Delany came in the 11th over to dismiss Lewis, bringing West Indian captain Nicholas Pooran to the crease.

Pooran walked back to the pavilion in the fifteenth over scoring just 13 off 11 balls. Rovman Powell also walked back to the hut in the 17th over with King anchoring one end, also bringing his fifty in the same over. Odean Smith and King smashed 34 runs off the last three overs to post a below-par total for Ireland. Smith remained unbeaten with 19 from 11 balls while King took the batting honours for his team, carrying his bat through the innings. Gareth Delany was the pick of the Irish bowlers with 3/16 from his four overs.