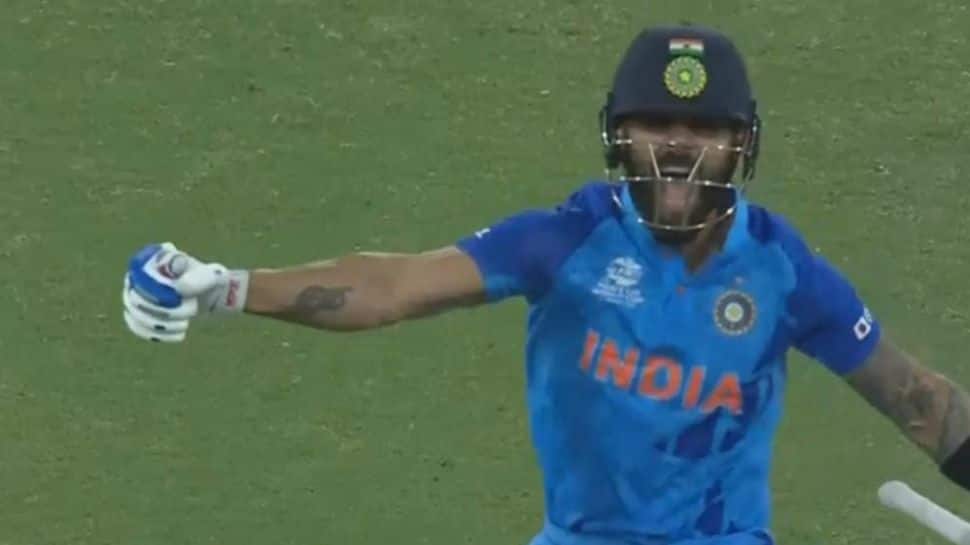 They say form is temporary but class is permanent and former India captain Virat Kohli proved this saying in the match against Pakistan in the ICC T20 World Cup 2022 at the Melbourne Cricket Stadium on Sunday. Virat Kohli scored 82 runs in 53 balls with the help of six boundaries and four sixes. He batted with the strike rate of 155. In the end India won by four wickets.

Earlier, The fast-bowling duo of Hardik Pandya and Arshdeep Singh picked three wickets each as Pakistan posted 159/8 in a topsy-turvy innings against India in a Super 12 match of the Men’s T20 World Cup at a sell-out Melbourne Cricket Ground on Sunday.

It was an innings where momentum oscillated between the two teams constantly. If India were good in the start thanks to Arshdeep’s new-ball burst, then Pakistan made a fightback with a 76-run partnership between Shan Masood (52 not out) and Iftikhar Ahmed (51) for the third wicket. India fought back in the end with a flurry of wickets to keep Pakistan a run below 160.

After Bhuvneshwar Kumar conceded just a wide in his opening over and found some swing, Arshdeep bowled a perfect first delivery in T20 World Cup debut by trapping Babar Azam lbw for a golden duck with a full, straight delivery coming in from over the wicket.

In his next over, Arshdeep had another scalp when his short and angling away ball cramped a sluggish Mohammad Rizwan for room. The right-hander attempted to hook it, but was hurried by pace and extra bounce as the top-edge was snapped easily at fine leg.

From 15/2 in four overs, Ahmed and Masood set about resurrecting Pakistan’s innings. Ahmed began with a forehand smash past mid-on off Bhuvneshwar for four while Masood picked a brace of fours with glance, cut and pull off Arshdeep, Shami and Pandya.

The duo was cautious against India’s disciplined bowling attack and waited for loose balls to hit them for boundaries. When Pandya dropped short and wide, Ahmed was quick to cut past point for four.

He upped the tempo of Pakistan’s innings when he smashed four sixes off six balls between the 11th and 12th overs — once off Ravichandran Ashwin and thrice against Axar Patel — to reach his fifty in 32 balls.

But Shami came back in the 13th over to break the partnership when his fuller delivery came in to catch Ahmed at the crease for a plumb lbw dismissal.

Pandya’s return brought more cheer for India when he had Shadab Khan and Haider Ali holing out to the outfield within five balls. Mohammad Nawaz thrived on width from Pandya, smashing a brace of fours through the off-side.

But the all-rounder had the last laugh as Nawaz went for the cut, but was cramped for room and could only nick behind to keeper. Arshdeep struck on the fourth ball of his second spell, bouncing out Asif Ali and giving the keeper a simple catch off the glove edge.

Masood, who held one end with luck on his side, cracked consecutive fours off Shami to bring up his third T20I fifty. Shaheen Shah Afridi smacked a six and four off Arshdeep in his eight-ball 16 while Haris Rauf smoked a six off Bhuvneshwar in the final over to take Pakistan to a fighting total.