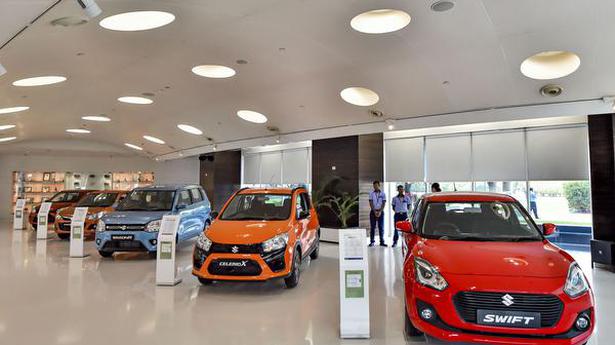 The global semiconductor shortage continued to play spoilsport for the Indian automobile industry with major manufacturers such as Maruti Suzuki, Hyundai, Toyota and Honda reporting a drop in wholesales for February. However, Tata Motors, Mahindra and Mahindra (M&M) and MG Motor recorded an increase in sales.

Market leader Maruti Suzuki’s domestic passenger vehicle (PV) sales slipped 7.4% last month to 133,948 units. “The shortage of electronic components had a minor impact on the production of vehicles which are primarily sold in the domestic market. The company took all possible measures to minimise the impact,” it said. The company, however, registered its highest ever monthly exports of 24,021 units.

Likewise, Hyundai Motor India registered domestic sales growth of 14.6% to 44,050 units while export dipped 10.7% to 9,109 units. “As the industry continues to grapple with semiconductor shortage situation, Hyundai, along with its partners is continuously exploring alternatives to ensure customers can take delivery of their most loved Hyundai cars at the earliest,” the company said.

Yuichi Murata, director, Marketing and Sales, Honda Cars India Ltd., said, “We are witnessing improvement in consumer sentiment as COVID-situation seems to be tapering off and markets are opening-up. This is positive for the industry. On supply side, chip shortage continued to impact our production and despatches in Feb’22. We hope the situation improves in future so that we can meet the market demand more effectively”.

Veejay Nakra, CEO, Automotive Division, M&M Ltd., said: “With overall sales of 54455 vehicles, we have achieved a growth of 89%… All segments showed robust growth including SUVs at 79%, which registered the highest-ever monthly volume. We expect demand to continue to remain strong as the Covid situation eases further. We continue to closely monitor the semiconductor related parts supply and take corrective action as appropriate.”

In the two-wheeler category, market leader Hero MotoCorp saw a decline of 31.5% in domestic sales to 3,31,462 units. “With a sharp decline in the number of COVID-19 cases and the economy gradually opening up with several other positive indicators, such as easing of lockdown restrictions, as well as the measures announced in the FY’23 Union Budget, a swift revival in sales is expected in the coming months,” the company said.

Likewise, Royal Enfield posted domestic sales of 52,135 motorcycles, a decline from 65,114 motorcycles during the same period last year. “Supply chain constraints due to the shortage of semiconductor chips continued to persist during the month and Royal Enfield is assiduously working with its supplier ecosystem to resolve the same.” it said, adding that international sales continued the upward trajectory with the company posting a growth of 55% in exports.