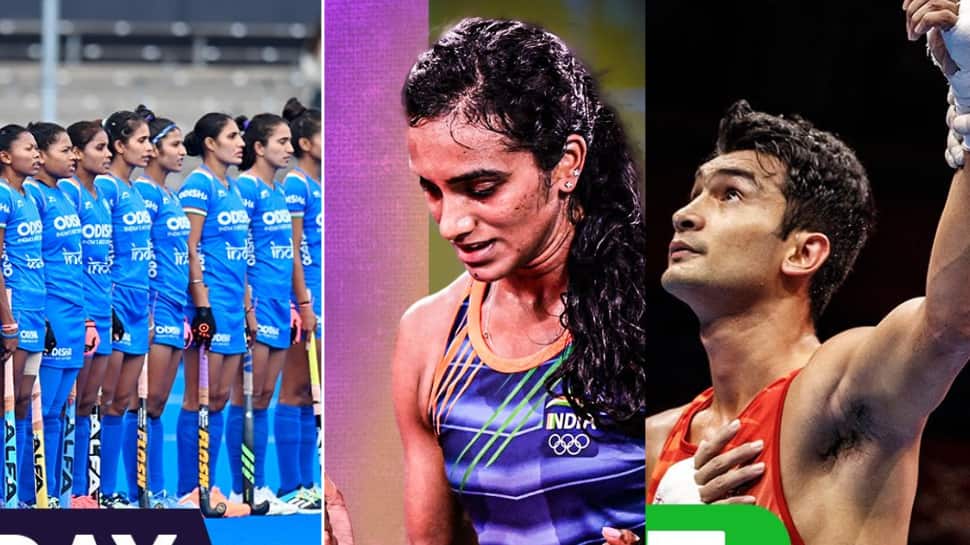 India did not clinch any medal at the end of Day 1 of Commonwealth Games 2022 but there were pretty good wins. India won in hockey, the table tennis teams got off to a good starts as well. India’s mixed team started off well with over Pakistan in Badminton. In boxing, Shiva Thapa beat Pakistan’s Suleman Baloch in Round of 32 clash in 63.5 kg category to move to pre-quarters. India, however, faced some losses as well, not doing much in Lawn Ball, Gymnastics, Triathlon and Cycling. The Indian women’s cricket team’s debut at CWG was forgettable as they lost by 3 wickets to Australia.

Below, take a look at key results at CWG from India’s standpoint on Day 1.

India’s fancied shuttlers didn’t break a sweat on way to taking an unassailable 3-0 lead over Pakistan in their badminton opener at the 22nd Commonwealth Games here on Friday.

The duo of B Sumeeth Reddy and Machimanda Ponnappa started the proceedings with a comfortable 21-9 21-12 win over Muhammad Irfan Saeed Bhatti and Ghazala Siddique in their mixed doubles clash at the National Exhibition Centre.

After the Pakistan pair appeared to put up a fight in the second game, Reddy finished the match with a down-the-line smash, and then, Kidambi Srikanth picked up from where his mixed doubles colleagues left, easily getting the better of Murad Ali 21-7 21-12 in the men’s singles match.

The gulf in class was evident as the Pakistanis struggled to match the high standards set by the Indians. Then, it was the turn of double Olympic medallist P V Sindhu to grab a dominant win over Mahoor Shahzad in women’s singles. The champion Indian shuttler won 21-7 21-6.

India lose to Australia in T20

World Champions Australia won the first women`s cricket match in Commonwealth Games history with a three-wicket victory over India thanks to Ashleigh Gardner`s unbeaten half-century and Jess Jonassen`s four-wicket haul in their T20 clash on Friday. Chasing 155 to win in the 20-over game, Australia were in trouble at one stage having lost half their side for 49, but Gardner got them over the line in style with an over remaining.

She smashed nine fours in her 52 not out off 35 balls while Grace Harris chipped in with 37 off 20 balls before Alana King (18 not out) helped finish the job.

India bowler Renuka Singh took 4-18 in her four overs but the effort was in vain.

India had opted to bat first after winning the toss and made 154-8 in their 20 overs thanks to skipper Harmanpreet Kaur`s 52 off 34 balls — a knock that included eight fours and a six — as well as opening batter Shafali Verma`s 48.

India’s men and women table tennis teams had easy starts to their respective campaigns with identical 3-0 victories over Barbados and South Africa in the Commonwealth Games here on Friday.

Australia win by 3 wickets.#TeamIndia will look to bounce back in the next game.

In a group 3 encounter against minnows Barbados, the pair of Harmeet Desai and G Sathiyan steamrolled Kevin Farley and Tyrese Knight 11-9, 11-9, 11-4 while veteran Sharath Kamal made short work of Ramon Maxwell 11-5, 11-3, 11-3 in less than 15 minutes.

The Indian women’s hockey team defeated a lowly Ghana 5-0 to start its Commonwealth Games campaign on a winning note here on Friday.

The Savita Punia-led team was, however, far from impressive in its first Pool A game.

Even though India dominated the match in all departments, it was a lacklustre performance from them in the first two quarters as Ghana’s defence produced a resolute show to frustrate their fancied opponents.

What was frustrating for India was the weak link-up between the midfield and the forwardline.

India`s Srihari Nataraj qualified for the men`s 100m backstroke swimming semifinal at the Commonwealth Games 2022 in Birmingham on Friday. Nataraj finished third in heat 4 with a timing of 54.68s. While Sajan Prakash was eliminated in the men`s 50m butterfly event as he finished eighth with a time of 25.01s. In Men`s 400m Freestyle heats, Kushagra Rawat finished 14th with a clocking of 3:57.45. Meanwhile, in the triathlon, India was unsuccessful in their first triathlon appearance in the Commonwealth Games as Adarsh Muralidharan finished 30th and Vishwanath Yadav finished 33rd in the men`s individual sprint final. Adarsh Muralidharan finished with a time of 1:00:38 and Vishwanath Yadav finished with a time of 1:02:52. England`s Alex Yee won the first gold medal of the Commonwealth Games on Friday, taking victory in the men`s triathlon. Later in the day, the women`s hockey team will face Ghana. The mixed badminton team would also be in action in the evening.