Don’t write him off…: S Sreesanth backs THIS Indian pacer to make comeback in form ahead of 2nd T20I against Australia 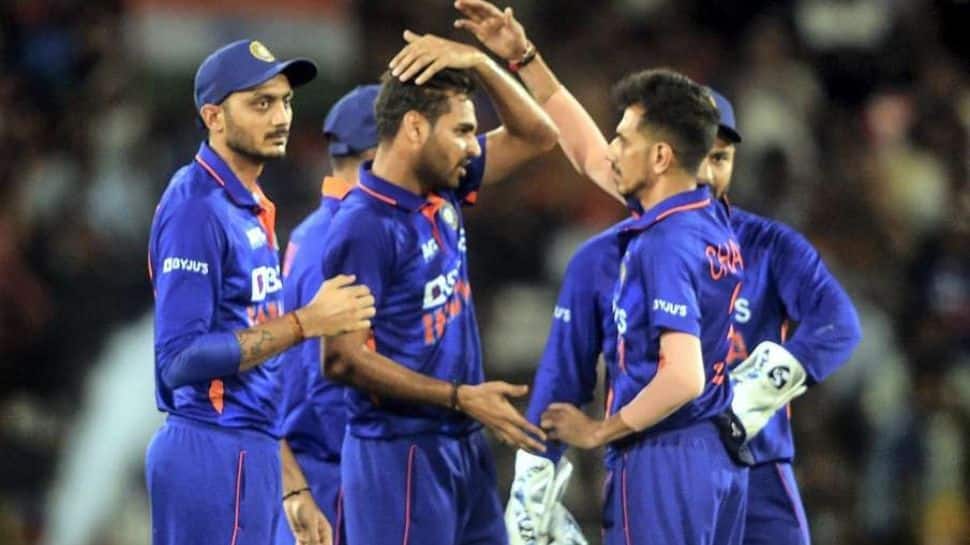 Former Indian cricketer S Sreesanth has backed the under-fire Bhuvneshwar Kumar to come good in the upcoming matches before the 2022 T20 World Cup in Australia next month, asking people to not write the veteran pacer off and support him. The 32-year-old Bhuvneshwar, who has been one of India’s best bowlers in the last one decade or so, has seen repeated failures at crucial junctures of the game in last few outings and his credentials as a proven death bowler has taken a big hit ahead of the all-important T20 World Cup. Whether it was games against Pakistan and Sri Lanka in Asia Cup 2022 or the first T20I against Australia, India have lost these three matches batting first and defending 41, 42 and 54 runs in the last four overs and the common factor in all of these matches was — ordinary performance of Bhuvneshwar, who conceded 19, 14 and 16 runs in the 19th overs.

Things went right down to the wire but it’s Australia who won the first #INDvAUS T20I.#TeamIndia will look to bounce back in the second T20I.

“Everyone is talking about Bhuvi. Let him be ‘yaar’. He is one of the best that Indian cricket has ever seen. Look at his records, from his maiden international match against Pakistan to even now, he has been doing very well. Every cricketer has lows and highs in their career. Let’s support and don’t put too much pressure on him. He is not going anywhere and will prove himself again,” Sreesanth told IANS at the sidelines of the Legend’s League Cricket event in the national capital.

“I have known Bhuvi since U-17 days, he is just going to get better from what he is going through now. Don’t write him off, don’t worry about the 19th over, he will do well in upcoming matches,” he added.

There have been debates and discussion about India’s squad selection for the World Cup, especially on the exclusion of Md Shami. However, Sreesanth believes that once the squad has been picked, Indian cricket fans should support them despite having different opinions.

“As an Indian cricket fan, we have to respect the decision of which BCCI, selectors, captain or coach on the team selection. Yes, we all have opinions and we should respect each other’s view,” he said.

“But, it’s high time, whatever team is selected, we should support them with all the energy and vibration and have faith in them. It’s very important to back them up and let’s all support the team, rather than criticising them,” he added.

Whether it was Asia Cup 2022 or the first T20I against Australia, Indian bowling has looked ordinary and been not able to pick wickets at crucial junctures. Asked whether Indian bowling lacks that penetration and it can hamper the team’s World Cup chances, the former cricketer said he is confident of a good show of bowlers at the mega event.

“We have very good bowlers who can penetrate any batting lineup and with Rahul bhai (Dravid) being the head coach and even the best of support staff, they are very hard-working, and smart enough to use them judiciously.

“In Australian conditions, where I was fortunate to play a lot of matches and we won the CB series in 2008, every team will be competitive but I am very confident that with a lot of experience, we have a great opportunity to break that barrier and win the World Cup again. It’s been fifteen years, so we have to win.”

The 39-year-old was part of that MS-Dhoni led team that won the inaugural edition of T20 World Cup in 2007. He has very fond memories from that victorious campaign.

“We won the first ever T20 World Cup in 2007 and should be proud of it. We were the first to do well, we are the masters, so people are learning from us. It’s been 15 years and it’s a long time and hopefully we can win the trophy again. I believe that we have a team, which can lift the trophy,” he said.

“My memories are very fresh and god has been extremely kind. I’m really grateful that the BCCI, selectors, especially the captain gave me an opportunity to play all the matches, even the warmups,” he added.

With the mushrooming of T20 leagues all over the world, young pacers nowadays are relying on slower ones and cutters rather believe trying to develop pace. As per Sreesanth, swing is still the king, irrespective of the format.

“Cricket is evolving and batters are not scared of pace anymore. Even then, there were many who were not scared by the pace but people with the pace, who can move the ball are still successful. One doesn’t have to only use cutters and slower ones, you can still get desired results with pace if you have the confidence,” he said.

“I used to always rely on my ability to bowl the hard length, hit the deck hard and make the ball swing. Whether you are bowling at 160 or 130 kmph, if you can swing the ball at the right area, one will be successful irrespective of the format. You just have to believe in yourself, work hard. I genuinely hope that youngsters are just bowling enough.

The Kerala born cricketer, who is representing ‘Bhilwara Kings’ team in the ongoing Legends League Cricket, said that the tournament is giving a new life to many retired cricketers.

“It’s been really good. Grateful and honoured to be part of this league. I am looking forward to playing all the remaining matches. The league is also giving opportunities to first-class cricketers. Don’t think LLC is just a retired players’ tournament,” he said.

“Even after retirement, there is life. If you can keep yourself fit, you will be taken by a franchise at a very good price. I am confident that this league is going to inspire players to remain fit and keep playing irrespective of their age,” he added.