Drone above, police below and section 144, due to Kanpur violence, strictness on Jume in every city from Kashi to Mathura in UP 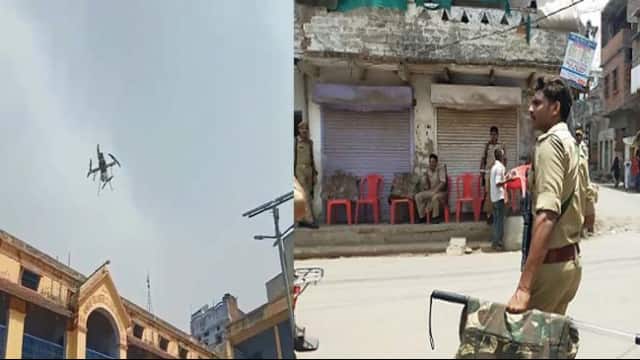 Due to the violence that erupted in Kanpur on June 3, there is an alert in the whole of UP on this Juma. From Kanpur to Kashi, Mathura, Gorakhpur, Meerut, Agra, Firozabad, Muzaffarnagar, in all the cities of western and eastern UP, the police are keeping an eye on the outside mosques and in sensitive areas. Somewhere with the help of drone cameras, surveillance is being done and somewhere the police is patrolling in the street.

Section-144 is applicable in Kanpur. On the other hand, CM Yogi Adityanath, who reached Gorakhpur last evening, gave a stern message to the miscreants that playing with law and order in the state will not be tolerated at all. He directed the officers to make strict security arrangements on Friday and said that they themselves should ensure that no one faces any kind of trouble.

Meanwhile, the effect of Bharat Bandh of an organization named Jamiat-ul-Olama-e-Hind is being seen on social media a day ago in many cities. In Varanasi’s Dal Mandi, Nai Sadak, Peeli Kothi, Madanpura, Bajardiha, about 70 percent of the shops are closed till noon. Police officers are constantly roaming in the area. Additional Commissioner of Police Law and Order Subhash Chandra Dubey and ACP Dashashwamedh Awadhesh Pandey themselves marched on foot on Friday at Chowk, Bansfatak, Dalmandi, Madanpura. Drones are being monitored in sensitive areas.

The Mathura Police has also beefed up the security arrangements for Friday prayers. Apart from the Idgah, Jama Masjid in the city to the countryside, there is a police force alert around the mosques in the towns as well. Police force has been deployed since morning in areas like Kasba Mahavan, Raya, Kosikalan etc. Let us inform that in these areas, police personnel are patrolling and appealing to the people to maintain peace. Apart from SP City, SP Countryside, COs are also touring with the police force in their respective areas.

It is being told that due to this captive, crores of rupees have been lost in a single day. To maintain peace and order, the entire police administration including DM Ravi Ranjan, SSP Ashish Tiwari is constantly visiting the city and taking stock. Drones equipped with cameras are flying over sensitive areas of the city. In Karbala, Nagla Bari, Rasulpur, Thana South area, Ramgarh area, roofs and streets are being monitored continuously with drone cameras. Whether the crowd is gathering somewhere, it is the most eye on it.

march before namaz in kanpur
Before the Friday prayers in Kanpur, the Police Commissioner along with the force took stock of the security arrangements by conducting route marches in sensitive areas. During this, in a conversation with the media, he told that the police is on alert in the entire city. Force has been deployed as a precaution. All preparations have been made to conduct Friday prayers peacefully. All the police officers are ready with the force. Force is deployed on the roofs. The sensitive areas are being closely monitored through drones. He inspected the new road Yatim Khana and the surrounding areas. Heavy forces are also deployed in areas like Naubasta, Kalyanpur, Babupurwa, Patkapur etc. of Kanpur.

From President to Prime Minister, Kanpur was turned into a battlefield

When violence broke out in Kanpur on June 3, President Ram Nath Kovind, Prime Minister Narendra Modi and Uttar Pradesh Chief Minister Yogi Adityanath were present on a stage in Paraunkh village of Kanpur countryside, a few kilometers from there. Roads turned into battlefields with stone pelting, bombing and lathi charge. The violence, allegedly over a statement by BJP leader Nupur Sharma, raised many questions.