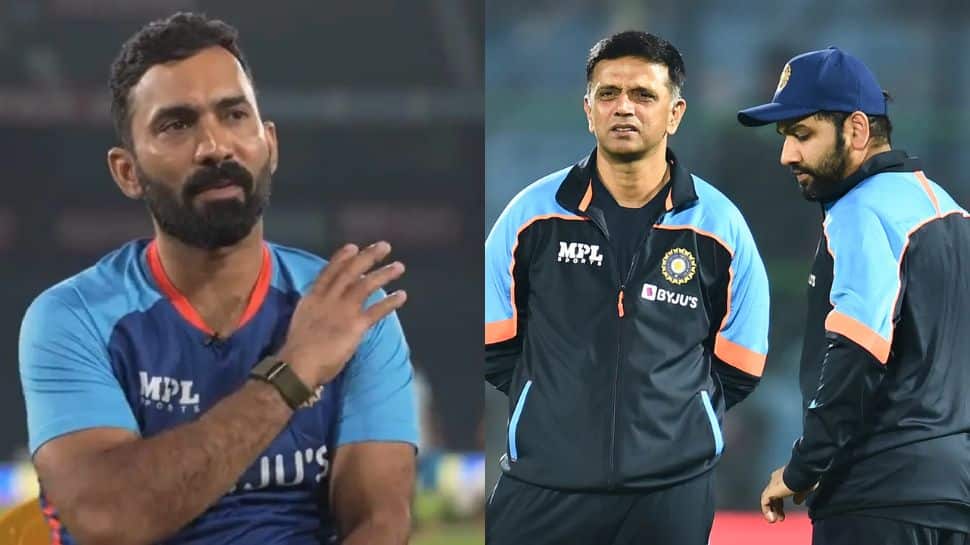 India captain Rohit Sharma and head coach Rahul Dravid took a shocking decision to drop Dinesh Karthik from the playing XI ahead of the Pakistan clash in the Asia Cup 2022 Super 4s at the Dubai International Stadium on Sunday. Rishabh Pant, who made comeback into the playing XI in the last match against Hong Kong, kept his place in the side while DK made way for Hadik Pandya who was rested in the last game. Pant did not bat in the Hong Kong game which makes this decision even more shocking. DK also had very little time in the middle during the Pakistan game but the Indian cricket fans are questioning the team management’s decision.

The guy only played 1 ball in Asia Cup till now!!!!

I don’t understand the propaganda happening behind the selection of #dineshkarthik. Experts and people are saying he’s a finisher and in a very good form. Please tell me when has he performed consistently and how many centuries and half centuries he has scored. #INDvsPAK @BCCI
— Shiva Bhardwaj (@Shivabbhardwaj) September 4, 2022

A very interesting India XI. Pant’s left-handedness and him able to bat in powerplay plus middle overs got him nod over Dinesh Karthik. Hooda coming in expected. Bishnoi, with his googlies and superb fielding in deep, is a surprise selection IMO. #INDvPAK #AsiaCup2022
— Niharika Raina (@niharika_raina) September 4, 2022

Aaj @DineshKarthik nahi hai toh india toh haaregi pakka @RishabhPant17 will help us to lose There was no mistake by Dk but a scam @DeepakHooda5555 will also us help to lose #dineshkarthik #pant#Indialoose
— Cricket only (@Indcric100) September 4, 2022

So they have dropped Dinesh Karthik again? Team BCCI has been unfair to him for a long time. No surprise. #INDvPAK #DK #dineshkarthik
— Vive la resistance (@Sapereaude_10) September 4, 2022

Hooda when you have Axar Patel

Ravi Bishnoi, the leggie gets a game ahead of Axar Patel

Some serious selection done by Management.

It looks likely that India is in mood of experiment for a Crunch Match#INDvsPAK#CricketTwitter #AsiaCup
— Varad Vaichal (@vaichal_varad) September 4, 2022

Dinesh Karthik was picked over Pant and Hooda in first 2 games, didn’t get to bat, and is now dropped in Super4, Hooda and Pant play ahead of him. Someone please explain it to me #AsiaCup2022 #INDvsPAK
— Amartya Choudhary (@AmartyaChoudha1) September 4, 2022

Rishabh pant is playing ahead of Dinesh Karthik.

How unlucky is Dinesh Karthik. Opportunity to play a World cup after so long, someone else gets injured and now his place in the XI is not a surity. #INDvPAK #INDvsPAK
— Wanderer (@DisDatNothin) September 4, 2022

Meanwhile, Pakistan captain Babar Azam won the toss and elected to bowl first. Last Sunday, India got the better of Pakistan in the group stage as Hardik Pandya’s one-man show got Men in Blue over the line in a thrilling final-over finish. Hasan Ali replaced injured Shahnawaz Dahani for Pakistan. For India Hardik Pandya, Deepak Hooda and Ravi Bishnoi are in Playing eleven.

Both the team are playing the match without their star player, India will play without senior all-rounder Ravindra Jadeja, while Pakistan are missing the services of Shahnawaz Dahani. Both the players picked up injuries which ruled them out of the Asia Cup.

Despite the two teams clashing just a week before, there is no shortage of excitement amongst the fans to watch the two sides go head to head in an encounter that has become a rarity of late.

The arch-rivals have played 15 matches against each other in Asia Cup so far. India have won 9 of them, while Pakistan bagged 5 while one match ended in a no-result.

Speaking at the time of toss, Pakistan skipper Babar Azam said, “We will bowl first. The dew could be a factor, that’s the reason we’re bowling first. We had a lot of positives from the last match against India. The message is to play positively – one change for us with Hasan Ali coming in.”

Speaking at the time of the toss, India captain Rohit Sharma said, “We would have bowled first, but now we need to play freely and assess a good score on this pitch. Momentum counts in this format, you’ve to be on the money from the start, not worry about external pressures. Injury is something we can’t control, Jadeja has been ruled out and he’s back home. It was a headache to select the playing XI – Hardik comes back. Deepak Hooda gets a game and so does Ravi Bishnoi.”