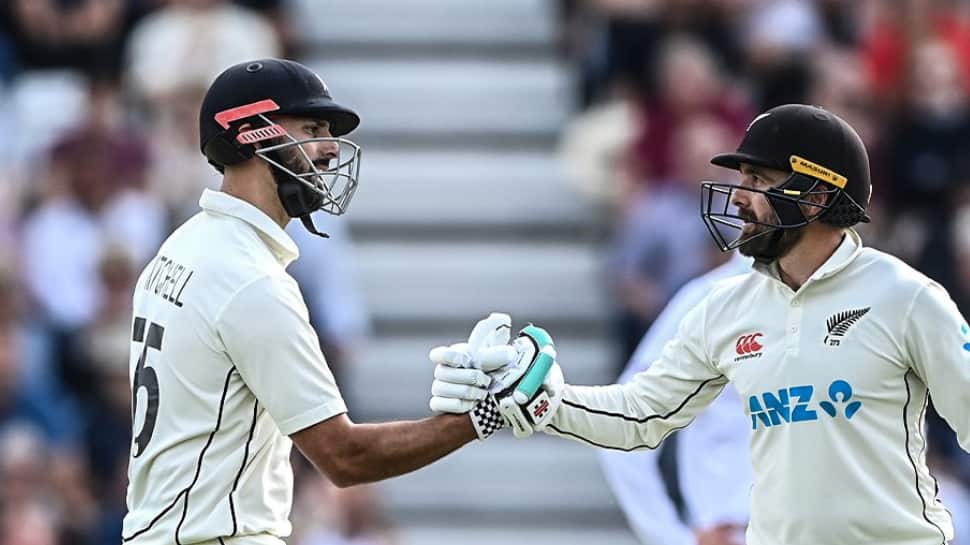 New Zealand finished the opening day of the second Test at the Trent Bridge as the happier of the two teams, finishing the day at 318/4. All of the visitors’ batters got the start but the day was saved by Daryl Mitchell and Tom Blundell whoses fifties ensured Black Caps did not get off the tracks after being put in to bat first by England captain Ben Stokes. Playing without their captain Kae Williamson, NZ openers Tom Latham and Will Young put on 84 for the first wicket before the stand was broken by Stokes as he removed the right-handed batter for 47. Soon Latham too fell for 26 to James Anderson. Henry Nicholls and Devon Conway then put on a 77-run stand for the third wicket to steady the innings after two back-to-back wickets. But their wickets too fell in quick succession. Daryl Mitchell and Tom Blundell then got together and batted till the stumps, in the process, hitting individual fifties.

They were helped on a day of entertaining cricket by England`s fielders missing plenty of chances. “England as a collective have not fielded well. Not just the dropped catches, but diving over a few and others going through their hands,” former England captain Michael Vaughan told listeners on BBC Test Match Special. “England were magnificent at Lord`s but today it was like putting on an old sweater. The team of the last two years is back.”

Joe Root dropped one catch and Zak Crawley let slip another chance after England, unchanged from the first test, had grabbed back-to-back wickets just before lunch. New Zealand`s opening stand was the highest in a test at the ground since 2005 but both openers departed in the space of two balls. England captain Ben Stokes provided the breakthrough, taking the ball and having Will Young caught for 47 by a diving Crawley at second slip.

New Zealand had been 84-0 and it was 84-2 when stand-in captain Tom Latham fell to Matthew Potts off James Anderson at midwicket. The visitors morning score was still a vast improvement on the 39-6 at lunch on the opening day of the first test at Lord`s. Anderson and Stokes each took a pair of wickets, with the captain`s two for 40 coming from 12 overs.

New Zealand were 161-3 when Ben Foakes caught Henry Nicholls (30) behind off Stokes and the Black Caps slipped to 169-4 after the wicket keeper repeated the feat with Devon Conway (46) from an Anderson delivery. Crawley dived across Root in a failed bid to catch Nicholls and Root missed an easier offering from Mitchell when the batsman was on one.

Mitchell, who provided a light-hearted moment when he smashed a six clear into the stands with the ball landing with a splash in someone`s beer, ended the day on an unbeaten 149 partnership with Tom Blundell.