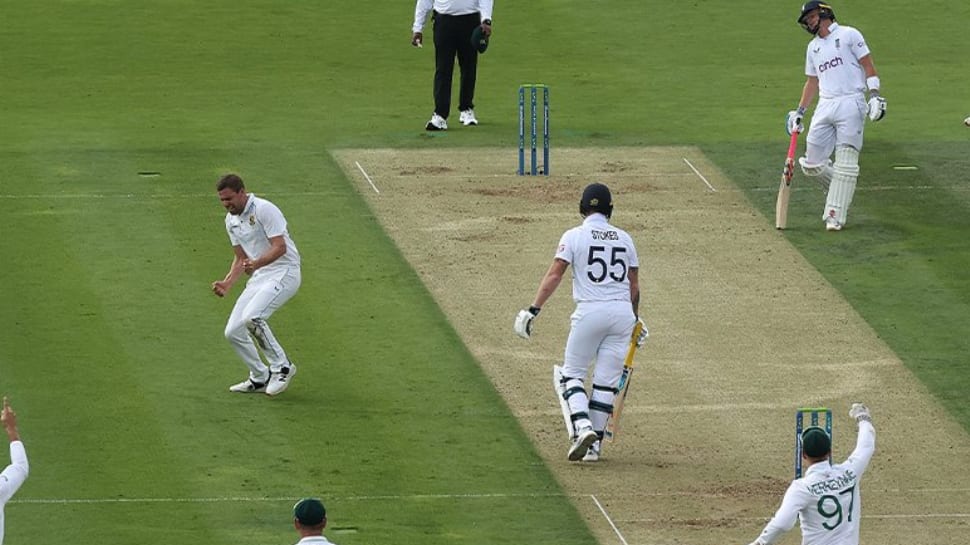 London: South Africa`s fast bowlers utilised the movement on offer at Lord`s to reduce England to 116/6 before heavy showers ended the play on the opening day of the first Test, here on Wednesday.

Ollie Pope (61 not out) and Stuart Broad (0 not out) were at the crease for England at stumps on Day 1.

Opting to bowl first, Proteas skipper Dean Elgar unleashed a four-prong pace attack led by Kagiso Rabada, who returned to the side after an injury layoff, under overcast skies at Lord`s.

Rabada did the talking early, moving the ball around to keep England`s openers in check. Alex Lees was the first to fall, nicking Rabada through to the wicketkeeper, to be dismissed for five. His partner, Zak Crawley, followed him soon after as Rabada struck again.

This time, the bowler found the edge of the right-hander as Crawley gave Aiden Markram a simple chance in the slip cordon. Thereafter, Marco Jansen found prodigious swing and one of those, a sharp inswinger, had Joe Root trapped in front.

With Root gone, South Africa were on top of proceedings and they pushed the advantage further when Anrich Nortje, after two expensive overs, sent Jonny Bairstow, England`s batter of the summer, back on his way with one that angled in to beat Bairstow`s bat and take out the stumps.

Pope was the best of England batters on show, playing comfortably on the front and back foot, and milking South Africa`s quicks for runs to get to a fine half-century. Skipper Ben Stokes stepped up to offer Pope company and the stand appeared to put England back in the game until Nortje struck a second time.

Stokes edged one to the third slip on the stroke of lunch to depart for 20 and leave England at 100/5. Nortje deepened England`s woes post lunch by nagging one back into Ben Foakes to clean him up. Nortje completed 50 Test wickets in his 13th Test with the scalp.

Rain, however, put the brakes on South Africa`s top-notch bowling performance. What appeared to be a light shower initially soon turned into torrential rain as hopes of further play in the day turned bleak and eventually umpires took the players off.