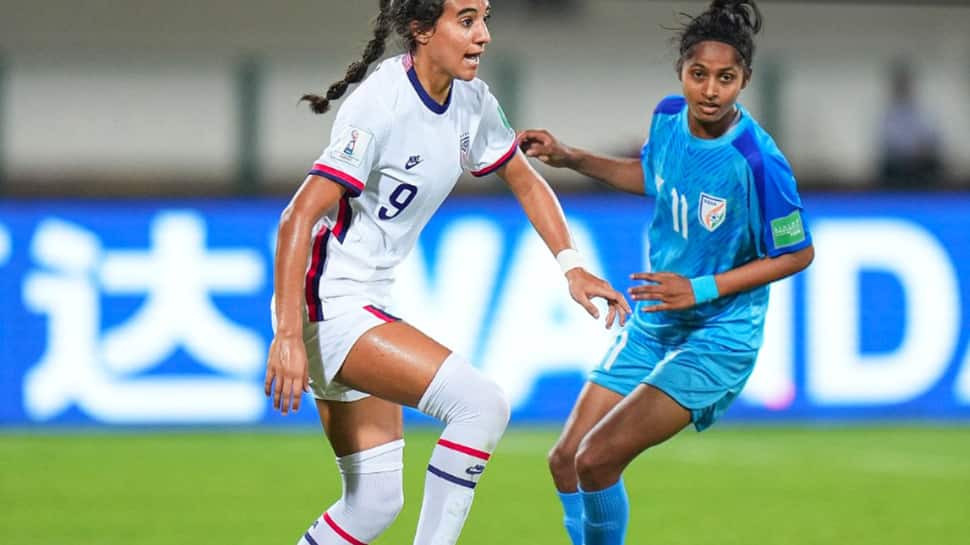 India were overwhelmed by a formidable USA in their opening match of the FIFA Women’s U-17 World Cup as they suffered a 0-8 thrashing in a lop-sided Group A match here on Tuesday. Reality bit the Indian team as it was toyed by a far more technically superior USA who were 4-0 up by the half-hour mark and 5-0 ahead at half time. USA pumped in three more goals in the second session to hand a humiliating defeat on the Indians before a sizeable home crowd at the Kalinga Stadium. Melina Rebimbas scored a brace (9th and 31st minute) while Charlotte Kohler (15th), Onyeka Gamero (23rd), Gisele Thompson (39th), Ella Emri (51st), Taylor Suarez (59th) and captain Mia Bhuta (62nd) struck a goal each for the Concacaf champions.

#IndianFootball needs a lot of improvement & that will happen if the popularity of the sports & the team increases in the country & more resources are put in for making world class players. Currently they are being hammered by USA. #INDvUSA #U17WWC #KickOffTheDream

India head coach Thomas Dennerby had said before the match that her side would be difficult to score against, having prepared well since February but his players completely were completely clueless and lost the plot on the day. The country’s first match in a women’s world cup turned out to be a nightmare.

Debutants India, who made it to the age-group showpiece on the basis of being the hosts, were simply run over by USA, who were runners-up in the inaugural edition in 2008 but has not gone past the group stage in three other appearances since then. The porous Indian defence, including captain Astam Oraon at the left wing back position, leaked goal after goal while the home side could not even stitch even a proper goal-bound move. The Americans had more than 70 per cent ball possession in the first half.

Dennerby made use of the full quota of five substitutes but India could have just two shots in the whole match with none on target.

The heavy defeat would put India in a difficult position to qualify for the quarterfinals with two matches left in the group stage — against Morocco (October 14) and title contender Brazil (October 17). Brazil had notched up a 1-0 win over Morocco in a Group A match played here earlier in the day. The top two teams from each of the four groups will qualify for the quarterfinals.

In a Group B match in Margao, Germany beat Nigeria 2-1.