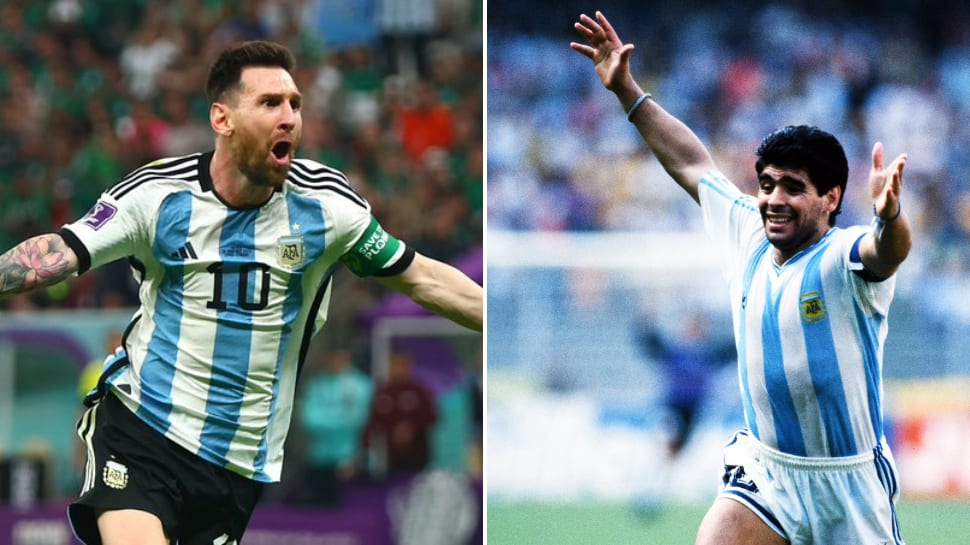 Seven-time Ballon d’Or winner Lionel Messi was at his best against Mexico in Argentina’s must-win Group C fixture of the FIFA World Cup 2022. The 35-year-old along with his Argenina teammates was in a tight situation walking into the fixture against Mexico with the fear of elimination inside their heads, but the Copa America champions kept their cool and displayed a dominant performance. Messi scored a goal and made an assist to help Argentina beat Mexico 2-0 on Saturday (November 26) at the Lusail Iconic Stadium. With the brilliant finish against Mexico, Messi equalled football legend Diego Maradona’s goal tally in the FIFA World Cup history for Argentina.

The 1986 World Cup winner, Diego Maradona has 8 goals in the World Cup for Argentina and Messi equalled his record with a much-needed goal against Mexico.

Argentina manager Lionel Scaloni lavished praise on Lionel Messi after the Albiceleste captain scored one goal and set up another in a 2-0 win over Mexico in their World Cup Group C duel on Saturday. Messi put his side ahead with a sublime long-range strike just after the hour before providing the final pass for Enzo Fernandez`s curling effort three minutes from time, reports Xinhua.

“The first half wasn’t a good one for either team but we started to play better in the second and Messi did what he does,” Scaloni told a post-match news conference.

Lionel Messi has scored 13 goals for Argentina in 2022, the most ever by an Argentine in a calendar year. The previous record, 12, was held by Lionel Messi and Gabriel Batistuta. Messi had scored 12 in 2012 for Argentina.  pic.twitter.com/5uYGavTgKL
— Roy Nemer (@RoyNemer) November 27, 2022

“The group is able to support him and knows the importance that he has.”

Scaloni made three changes early in the second half, replacing Guido Rodriguez, Lautaro Martinez and Gonzalo Montiel with Nahuel Molina, Julian Alvarez and Fernandez. But the 44-year-old refused to take the credit for his side`s change of fortunes.

“We got through a difficult period in the first half … and the game changed,” Scaloni said.

“That (the change) wasn’t because of the substitutions. It was because we have good players and we have Leo, and that’s what’s important.”

The result followed Argentina’s surprise 2-1 loss to Saudi Arabia in their opening match of the tournament and averted the prospect of elimination in the World Cup group stage for the first time since 2002.

A victory, and possibly even a draw, in their final Group C match against Poland on Wednesday will secure the Albiceleste a place in the round of 16. Scaloni predicted another stern test for his forwards against the European side.

“It’s going to be difficult because everybody plays differently (against us), not only because of Leo but because of other [attacking] players that we have. That makes the game more difficult. We will try to play the game that everybody is hopping for and if it doesn’t eventuate we will leave everything on the pitch like we did today.”

Scaloni suggested the media had overreacted to his team’s defeat to Saudi Arabia, insisting his players had not been deflated by the result.

“You have to have more common sense and realize that you are playing a game of football,” Scaloni said.

“It’s difficult to convince people that tomorrow the sun will rise and the most important thing is how you go about doing things. That’s what we try to keep in mind.”

He added: “We are happy because we won. Maybe you will call me crazy but it`s no more than that. We’ll celebrated but tomorrow we have to think about the next game and maintain an equilibrium.” (With IANS inputs)