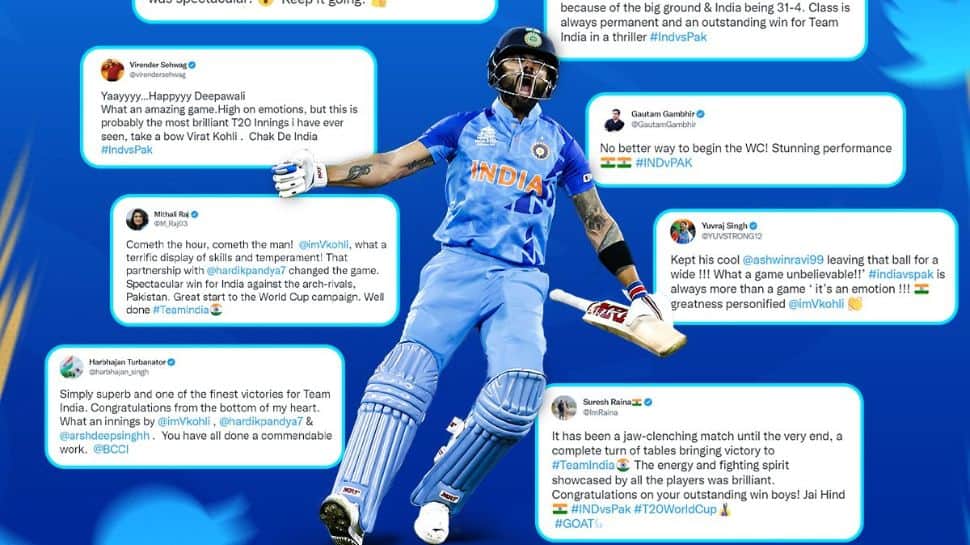 After India’s win over Pakistan in their ICC T20 World Cup match, legendary Indian cricketer Sachin Tendulkar heaped praises on star batter Virat Kohli, saying that it was “undoubtedly the best innings of his life”. An explosive half-century by star batter Virat Kohli and a century stand with Hardik Pandya helped India defeat Pakistan by four wickets in their Group 2, Super 12 match of the ongoing ICC T20 World Cup at the iconic Melbourne Cricket Ground (MCG) on Sunday.

What a thrilling encounter, undoubtedly this will be Virat Kohli’s greatest knock in the limited overs format. Go for glory and win the silverware. #T20WorldCup @imVkohli #INDvPAK pic.twitter.com/XUkKxzMbxM
— Yusuf Pathan (@iamyusufpathan) October 23, 2022

Amazing atmosphere, nail biting finish and a fantastic win. Onto the next one. ___ pic.twitter.com/Wua8ntdTrZ
— Rishabh Pant (@RishabhPant17) October 23, 2022

At a loss for words_ Wouldn’t have preferred anyone else with me out there @imVkohli __ One of the best games of my life __ pic.twitter.com/jWge1qy5lj
— hardik pandya (@hardikpandya7) October 23, 2022

What an emotional game tonight.

The pride we play for.

A stunner of a performance by Virat kohli.

Special win. Thank you to all our fans for turning up in numbers. ___ pic.twitter.com/hAcbuYGa1H
— Virat Kohli (@imVkohli) October 23, 2022

Congratulations #TeamIndia for the stunning performance against Pakistan! __ _ What an inning _ pic.twitter.com/1ln19Td41B
— Shikhar Dhawan (@SDhawan25) October 23, 2022

Thriller of a game which has beautifully set up India’s #T20WC campaign!

Crucial contributions by a number of individuals, but a special mention to Hardik’s partnership with Virat which was very crucial for #TeamIndia.#INDvPAK pic.twitter.com/IOBdREC6KZ
— Sachin Tendulkar (@sachin_rt) October 23, 2022

.@imVkohli, it was undoubtedly the best innings of your life. It was a treat to watch you play, the six off the back foot in the 19th over against Rauf over long on was spectacular! _

It has been a jaw-clenching match until the very end, a complete turn of tables bringing victory to #TeamIndia The energy and fighting spirit showcased by all the players was brilliant. Congratulations on your outstanding win boys! Jai Hind __ #INDvsPak #T20WorldCup
#GOAT_ pic.twitter.com/2v4Hqrdn0F
— Suresh Raina__ (@ImRaina) October 23, 2022

One of the only sports that can bring the emotions out of a beast. #IndvsPak pic.twitter.com/VYv0AnGvee
— Amit Mishra (@MishiAmit) October 23, 2022

Kohli will always be a champion cricketer, one of the best batsman ever to play the game and someone who makes us proud to be an Indian. __ #Truechampion @imVkohli
— Mohammad Kaif (@MohammadKaif) October 23, 2022

What an amazing game.High on emotions, but this is

“@imVkohli, it was undoubtedly the best innings of your life. It was a treat to watch you play, the six off the back foot in the 19th over against Rauf over long on was spectacular! Keep it going. #INDvPAK #T20WorldCup,” tweeted Tendulkar.

“Thriller of a game which has beautifully set up India’s #T20WC campaign! Crucial contributions by a number of individuals, but a special mention to Hardik’s partnership with Virat which was very crucial for #TeamIndia . #INDvPAK,” added Tendulkar in another tweet. BCCI secretary Jay Shah also congratulated the batter on his knock, saying that he had turned back the clock to showcase his skills while chasing.

“Turning back time! The chase master @imVkohli is back and what a match to showcase his skills. What a game we have witnessed today! Congratulations #TeamIndia #INDvsPAK2022@BCCI @ICC,” tweeted Shah.

Former Indian spinner Amit Mishra also tweeted, “When the kingdom falls, the king rises… Take a bow King Kohli. #IndvsPak.” Former Indian spin great Harbhajan Singh congratulated India on their win as well. “Simply superb and one of the finest victories for Team India. Congratulations from the bottom of my heart. What an innings by @imVkohli, @hardikpandya7 & @arshdeepsinghh. You have all done a commendable work. @BCCI,” tweeted Harbhajan.

Legendary all-rounder Yuvraj Singh also congratulated India on a memorable triumph. “Kept his cool @ashwinravi99 leaving that ball for a wide !!! What a game unbelievable!!’ #indiavspak is always more than a game ‘ it’s an emotion !!! greatness personified @imVkohli,” tweeted Yuvraj.