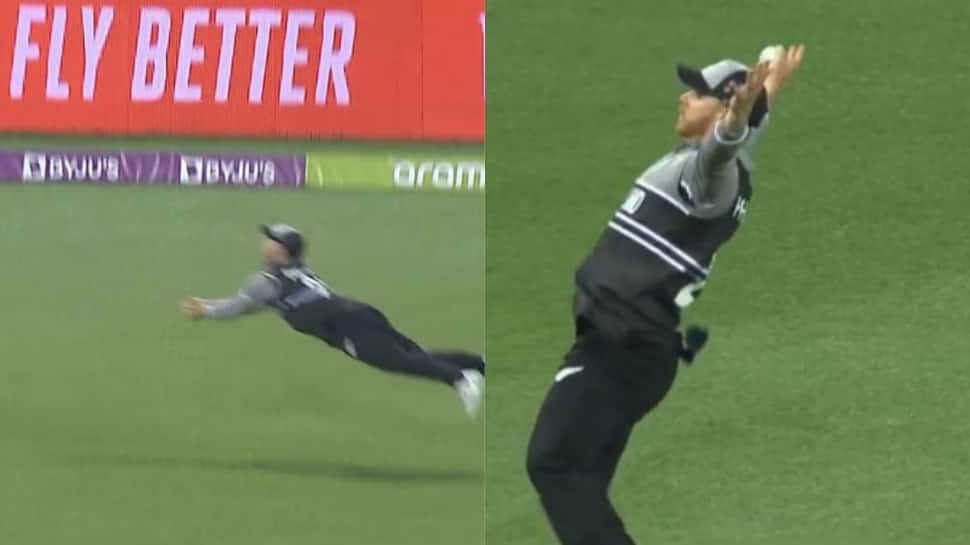 Glenn Phillips did not bowl. Batted for just 10 balls. But he still made headlines courtesy his brilliant catch in the first Super 12 match of ICC T20 World Cup 2022. He dived big in the deep to get rid of dangerous Marcus Stoinis. That was a catch to remember for a long time and is already being hailed as the ‘Catch of the Tournament’. New Zealand dominated the match right from the start and Phillips catching was one of the biggest highlights. It came in the 9th over of the innings bowled by Mitchell Santner.

He tossed the ball up and made Stoinis reach out for it. The batter did not time it properly or put massive power behind the shot, it went to the no man’s land in the deep but Phillips covered a long distance before diving big to take a stunning catch. The T20 World Cup will see many good catches in days to come but this one will surely be talked about first.

Take a look at the catch below:

We can reveal that this catch from Glenn Phillips is one of the moments that could be featured in your @0xFanCraze Crictos of the Game packs from Australia v New Zealand.

Grab your pack from https://t.co/EaGDgPxPzl to own iconic moments from every game. pic.twitter.com/ozTLvGNzZR

Earlier, courtesy a brilliant unbeaten 92 by Devon Conway and a quickfire 42 from Glenn Phillips, New Zealand put on 200 for 3 in 20 overs after Australian captain Aaron Finch won the toss and opted to bowl first. Australia failed miserably in the chase of 201 runs, getting bowled out for just 111 inside 20 overs. This is a big blow to the host nation as well as the defending champion and there are going to be many meetings held before the next match.

Finch and David Warner fell cheaply and apart from Glenn Maxwell, no one really looked in great touch. New Zealad bowlers were too good on this day. In fact, this was an all-round show from the Kiwis. They are not the big contenders for the trophy but tonight they showed that why the experts are wrong. Conway, Phillips, Allen, Southee and Boult are a force to reckon with and the world needs to watch for this team now after this brilliant show.