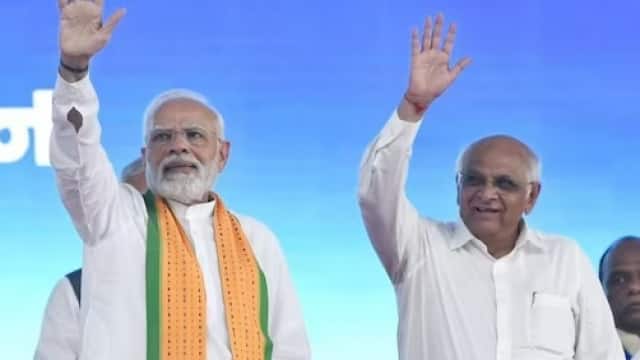 Gujarat Exit Poll 2022: While campaigning during the Gujarat assembly elections, Prime Minister Narendra Modi repeated one thing several times, which now seems to be coming true. In fact, while addressing rallies for the first and second phase of voting, PM Modi told the forums many times that Bhupendra (CM Bhupendra Patel) will break the record of Narendra (Narendra Modi himself). PM Modi said this in many rallies. Now the exit polls of various channels are also pointing in the same direction. In all the exit polls, the BJP is once again seen returning to Gujarat. The party can break all its previous records this time. BJP can get more than 150 seats in Gujarat. If this happens, BJP will become the party that won the maximum number of seats in Gujarat elections in history.

How many seats for BJP in which exit poll?
All the exit polls have claimed a big victory for the BJP. If we talk about exit polls of News-X-Jan, then 117-140 seats can go to BJP’s account. Congress can get 34-51 seats. The Republic TV exit poll has predicted 128 seats for the BJP, while the Congress has been given 30-42 seats. At the same time, in the exit poll of TV 9 Gujarati, 125-130 seats have been given in BJP’s account. Congress can get 40-50 seats. India Today, Axis My India exit polls predict that BJP may even cross 150 in Gujarat. BJP has been given 129-151 seats in the poll. Congress can win 16-30 seats in Gujarat.

CM Bhupendra can break PM Modi’s record
The BJP has remained in power in Gujarat for the last 27 years. The Congress had definitely put up a fight in the last 2017, but proved unsuccessful in getting a majority. In the year 2002, BJP won the maximum number of 127 seats under the leadership of Narendra Modi. It was the best performance of BJP in Gujarat. Now if the exit polls are correct then BJP can destroy all the old records. Not only this, till now the Congress holds the record of winning the maximum number of seats in Gujarat in the year 1985. Then the Congress under the leadership of Madhavraj Solanki got the maximum 149 seats. According to the India Today exit poll, this time BJP can get up to 151 seats in Gujarat. If this happens then the party can break this old record of Congress.

Another big blow to Adani Group, the market cap of the group’s shares reduced to half