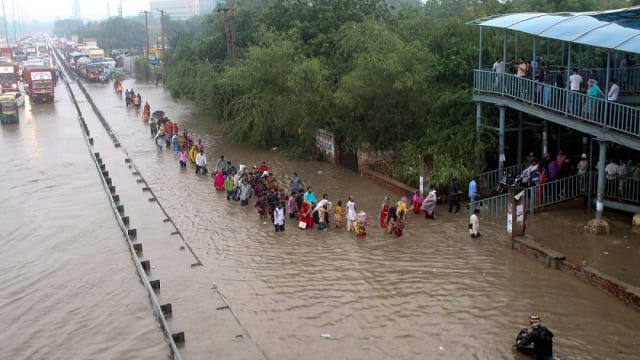 In Haryana’s Millennium City Gurugram, adjacent to Delhi, the situation has worsened due to the torrential rains that continued since Thursday morning. The rain has exposed all the claims of the Municipal Corporation and the administration. The rains have created a flood-like situation in the city. Due to this, several kilometers long jam was caused on the Delhi-Gurugram Expressway in the evening.

Four to five feet of water was also flooded on the highway and the inner roads of the city. Due to this people struggled with waterlogging and jams throughout the day. The speed of vehicles came to a standstill on the Delhi-Jaipur highway during the rain that occurred around 8.30 am on Thursday. Motorists traveling from Gurugram to Delhi and Delhi to Jaipur had to grapple with heavy traffic jams on the Delhi-Jaipur highway. However, more than 1200 traffic policemen were present on the roads till late night to ensure that the passersby could reach home on time.

read this also : Rain in NCR, schools closed on Friday in Noida, WFH advice on 23 in Gurugram

Vehicles crawling on the highway for hours

At the same time, from Delhi to Jaipur, vehicles kept moving from Ambius Mall towards Cyber ​​City. Apart from this, similar conditions remained near Laser Valley Cut, Jhadsa. At the same time, there was a problem of traffic jam in the inner areas of the city. Due to waterlogging at Basai Chowk, there was a jam. Apart from this, vehicles crawled on Mehfield Garden, Hero Honda Chowk to Umang Bhardwaj Chowk and Golf Course Extension Road due to waterlogging. Apart from this, there were similar problems on the Gurugram-Faridabad road.

Waterlogging occurred at more than 80 places

People continued to face problems till late night due to waterlogging at more than 80 places after the rain. Due to the rain, there was waterlogging on the highway as well as in old and new Gurugram. Waterlogging occurred mainly in AIT Chowk, CRPF Chowk, POSCO Sector-18, Good Earth Mall, Artemis Chowk, Sector-46/47 Traffic Light, Sector-21/22 and other areas.