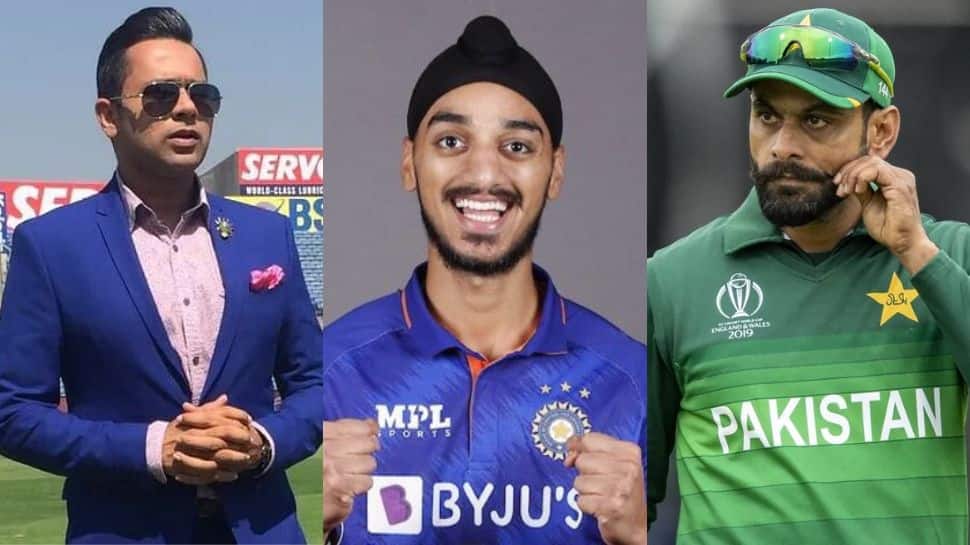 Following his side’s five-wicket loss to Pakistan in the Super Four clash at the ongoing Asia Cup, star Indian batter Virat Kohli had some strong words of support for young pacer Arshdeep Singh, who had dropped a crucial catch in the 18th over of the match. A superb fifty by Mohammed Rizwan and cameo by Mohammad Nawaz powered Pakistan to a five-wicket win in a last-over thriller Super Four clash against Pakistan at the ongoing Asia Cup 2022 on Sunday.

“Even when I played my first game against Pakistan in Champions Trophy, I played a bad shot and got out. Anyone can make mistakes under pressure. It is natural to feel bad. The team environment is great right now, credit for this goes to management and captain. So one must accept his mistake, address it and look forward to being in that pressure situation once again,” said Kohli in a post-match press conference on Sunday. The batter admitted that Mohammad Nawaz’s innings of 42 runs in just 20 balls was a turning point in the game.

I have known many cricketers. Arshdeep Singh is the nicest person in this team. In times to come he will win many matches for India. Those cursing him are not fans of cricket. More strength to Arshdeep. I am his fan. Hopefully his colleagues will back him too __
— Vijay Lokapally __ (@vijaylokapally) September 4, 2022

Every Indian is proud of #ArshdeepSingh. The issues related to cricket should be settled on cricket field only. Those who are paid to create rift among India’s unity must understand that Indians won’t buy your propaganda. We stand with our boys. __ pic.twitter.com/bVjqDBWCbq
— Amit Mishra (@MishiAmit) September 5, 2022

To drop a crucial catch and then go on to bowl the last over to the penultimate ball says a lot about a player.

My request to all Indian team fans. In sports we make mistakes as we r human. Please don’t humiliate anyone on these mistakes. @arshdeepsinghh
— Mohammad Hafeez (@MHafeez22) September 4, 2022

Big win for Pakistan. What a chase. Sending Nawaz up was the key.

“A chance was taken by sending him up the order. To play such impactful innings is good. Had his innings been restricted to just 15-20 runs, things could have been different,” he added. Kohli is extremely satisfied and happy with his team’s aggressive approach in T20Is and it is not shaken by wickets lost in middle overs. He said that he was trying to hit the ball at a faster rate but as wickets fell, he had to carry on batting till the end and hold one end steady.

“The way we have been playing, it has been giving us the results that we need. Our middle overs run rate improved and I took notice of it as a batter as one area where we need to work to improve. But sometimes, things do not go your way. We lost some wickets in the middle phase which did not allow us to take the game towards 200-run target because Hooda and I, bowlers were to follow. Given the situation, if we had more wickets in hand, we could have got more runs,” he said.

Talking about addressing the critics through his good performances, Virat said that he does not pay attention to such things. “I have played 14 years of cricket. It does not happen by chance. I was able to score runs. My job is work on my game, something I am always keen to do, to improve my game for the team. People have their opinions but that does not change my happiness as a person. I had taken some time off, put things in perspective. This has given me relaxation and realisation that this all is not the end of world and I need to enjoy my game. I was able to find that excitement again. The environment was welcoming when I came back and I am enjoying the way I am batting.”

“When I left Test captaincy then one person messaged me was MS Dhoni. No one else even though they have my number. Neither he wants anything from me and nor I want anything from him. If there is a genuine connection, it is reflected this way. We were not insecure of each other. People give a lot of suggestions publicly. If I want to say something to someone, I would reach out individually. If one does want me to improve, he can talk to me one on one. But if you want to give me suggestions publicly, I do not hold value to it,” he concluded.

Virat has played solid knocks in Asia Cup so far. He has scored 154 runs at an average of 77.00. His best individual score is 60 and he has hit two half-centuries. The star batter agrees that such great matches between India and Pakistan are good for not only two arch-rivals but also international cricket as a whole.

“Pakistan is a good balanced side. They have a potent bowling attack. When two good balanced team play then there will be exciting matches,” he added. He also lavished praises on all-rounder Hardik Pandya, saying, “Hardik has utilized his potential. He realizes what he can do. Once he gets going he can take the game away.” India’s next super four clash is against Sri Lanka on Tuesday. Coming to the match, a superb fifty by Mohammed Rizwan and cameo by Mohammad Nawaz powered Pakistan to a five-wicket win in a last-ball thriller Super Four clash against Pakistan at the ongoing Asia Cup 2022 on Sunday.

It was an exciting day of cricketing action for the fans as they got their money’s worth. Rizwan’s brilliant 71 off 51 balls proved to be the difference between both sides. Chasing 182, Pakistan openers Babar Azam and Mohammed Rizwan tried to give their side a solid start, mixed with some occasional big hits and consistent strike rotation. However, in the fourth over, spinner Ravi Bishnoi struck for India, sending back Babar Azam for 14 off 10 balls while the batter was trying to hit it over the midwicket region. At this point, Pakistan was 22/1.

Babar’s horrific run in the tournament continued as he registered his third below-20 score of the tournament. Southpaw Fakhar Zaman was up next on the crease. Zaman kept taking his time to settle while Rizwan continued to look good from the other end. They kept the scoreboard ticking for Pakistan and took them through the powerplay without any further damage. At six overs, Pakistan was at 44/1, with Rizwan (24*) and Zaman (6*) at the crease. The team crossed fifty-run mark in 6.4 overs. Another spinner struck for the Men in Blue in the ninth over as Yuzvendra Chahal sent back Fakhar Zaman for 15 off 18 balls after he was caught by Virat Kohli at long-on while attempting to hit it big. Pakistan was now at 63/2 with this 41-run stand coming to an end.

All-rounder Mohammad Nawaz was next up on crease. He started his inning really well by smashing a four and a six in his first five balls.

At the end of ten overs, Pakistan was at 76/2, with Nawaz (11*) and Rizwan (35*) at the crease. The duo displayed some attacking intent while batting, Nawaz in particular. Rizwan also kept things steady from the other end. Rizwan brought up his half-century in 37 balls with four boundaries and two sixes and also helped his side touch 100-run mark in 12.2 overs. The duo brought up their fifty-run stand in just 29 balls, keeping Pakistan in contention. In the final six overs, Pakistan needed 63 runs Two boundaries in the first two balls of the next over gave Pakistan an edge. This over bowled by Chahal gave away 16 runs and at the end of it, Pakistan needed 47 runs off 30 balls.

It was Bhuvneshwar Kumar that gave Team India a much-needed breakthrough, sending off Nawaz back for 42 off 20 balls and breaking the 73-run stand between the duo. It was Deepak Hooda who took a catch at long-off. Khushdil Shah was next up on the crease. With final four overs to go Pakistan needed 43 runs. Rizwan kept the scoreboard ticking in the next over. Hardik Pandya was under pressure but delivered big wicket of Rizwan on the fifth ball of his over, sending him back for 71 off 51 balls after he was caught by Suryakumar Yadav. Pakistan had lost their 4th wicket at 147 runs and Pandya had revived India’s chances in the game after catching the big fish.

Arshdeep came to deliver the final over. He took the wicket of Asif Ali to keep Team India’s hopes alive, with two runs needed in two deliveries. Ali was out for 16 off seven balls. Iftikhar Ahmed was the next batter. His side won the match with one ball to go by five wickets. Ravi Bishnoi was the pick of the bowlers with 1/26 for India. Bhuvneshwar, Arshdeep, Pandya and Chahal took a wicket each.