IMD Rainfall Alert: A cyclonic storm is about to give, there will be rain in these states 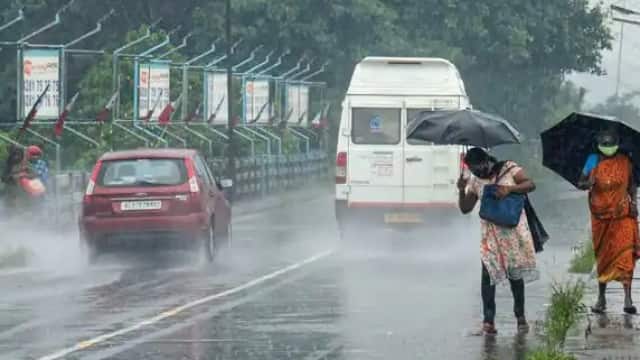 Weather Update, Cyclone Alert: After intensifying further on Saturday, the low pressure area over North Andaman Sea is likely to intensify into a cyclone by October 24. According to the bulletin issued by the India Meteorological Department (IMD), this low pressure area has formed in the south-southeast about 1,460 km from Sagar Island in West Bengal. Due to this, heavy rains are expected in many states in the coming days.

Talking about the southern states, there is a possibility of moderate rain in Tamil Nadu, Puducherry, Karaikal, Kerala and Mahe on 22 October. At the same time, there is no rain expected in North West and Central India, while snowfall may occur at some places in the hilly areas.

When will the cyclonic storm reach?
On the cyclone, the Meteorological Department informed that it is expected to move north-westwards and intensify into a severe low pressure area over and around southeast Bay of Bengal and over east-central region by the morning of 23 October. According to the department, “It is again expected to move gradually north-northeastwards and intensify into a cyclonic storm over the middle of the Bay of Bengal by the morning of October 24.” According to the Meteorological Department’s forecast, its Thereafter, it will continue to move north-west-eastwards and reach Bangladesh coast between Tinakona Island and Sanddweep in the early hours of October 25.

Thailand named Sitrang cyclone
Thailand has suggested the name ‘Sitrang’ for this possible cyclonic storm. The Meteorological Department has advised fishermen to avoid venturing into the central Bay of Bengal and deep sea areas on Saturday. Also, between 23 and 26 October, they have been prohibited from going to the Odisha coast and west-central and north Bay of Bengal. Due to these weather conditions, heavy rains are expected in most areas of Bengal and Odisha. According to Sanjib Bandopadhyay, Deputy Director General, Regional Center of Meteorological Department in Kolkata, North-24 Parganas and South-24 Parganas districts are expected to receive very heavy rains on October 24. Heavy rain is also expected in West Medinipur on the same day. Bandopadhyay said that heavy rain is expected in Nadia, North 24 Parganas and South 24 Parganas the next day. He said that there is a possibility of rain in Kolkata, Howrah and Hooghly on both the days.