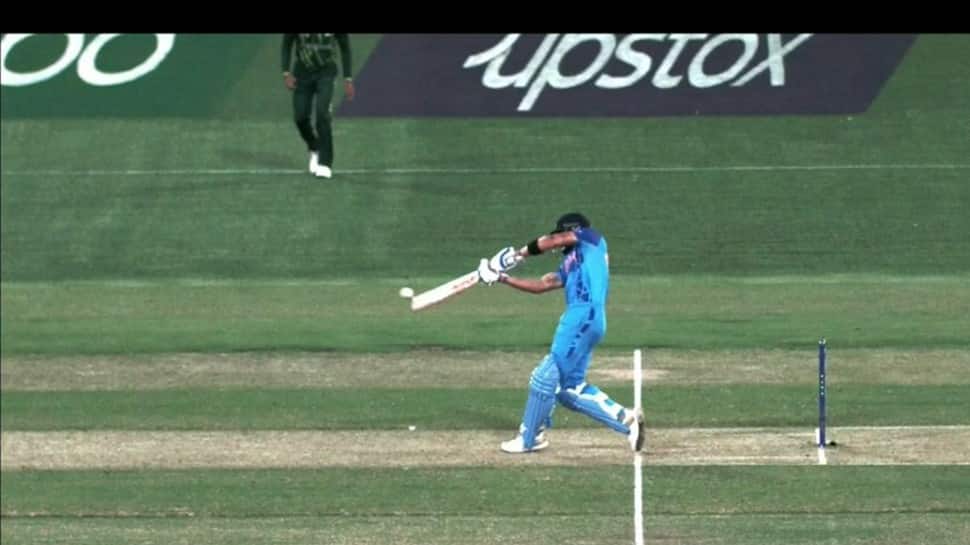 T20 World Cup 2022: In an epic battle between two arch-rivals India and Pakistan, Virat Kohli owned the grand stage with a knock for the ages as he powered India to emphatic 4-wicket win over Pakistan in a heart-stopping T20 World Cup game at the MCG on Sunday (October 23). The former India captain was in a different zone in the clash against Babar Azam’s Pakistan as he smacked 83 off 53 balls anchoring India to chase there target of 160 runs setup by Pakistan. The game that went right down to the wire had a lot of nervous and unusual moments. One of them were when in the last over, Pakistan’s Mohammad Nawaz’s delivery to Kohli was given a no-ball.

With 14 needed off 3 balls, Nawaz’s juicy full-toss was dispatched for a six over square leg and it was called a no-ball after deliberation by on-field umpires. Nawaz, the hero of Pakistan’s Super 4 victory in the Asia Cup, by then had lost his nerves. The Pakistan fans on social media were left furious by the umpires decision alleging that Babar Azam and his side were ‘cheated’ and the umpire only gave the no-ball because Virat Kohli asked for it from the umpires.

No ball given just because Virat Kohli demanded. There was no review #PAKvIND pic.twitter.com/Lu5wYOQs6x
— Azan Ahmad (@azanahmad257) October 23, 2022

Virat Kohli was out of the crease and ball was at his waist height, bowler was also spinner, so the ball had to be under waist height. It was a wrong no ball and Virat was clean bowled on the very next ball, if he is not out due to a free hit, then there should be a dot ball. pic.twitter.com/TtfAfLVm1f
— Shariq Abbasi (@i_shariq_i) October 23, 2022

No ball given by umpire when Batsman asked from an umpire. #IndvPak pic.twitter.com/xAbLD1z4pC
— Sherlock MIND  (@Dreamerdude12) October 23, 2022

BTW wo no ball nahi thi …

A foot outside the crease, never a no ball. absolute disgrace. A big crime.#T20WorldCup   #INDvPAK pic.twitter.com/g8miMwDzR9
— John Burke (@SirJohnBurke) October 23, 2022

The only reason the no ball was called was because as soon as he hit it, Kohli ran to the umpire to complain.
— Dennis Kohli (@DennisCricket_) October 23, 2022

a foot outside the crease, never a no ball. absolute disgrace.#T20WorldCup | #INDvPAK pic.twitter.com/rk5BxkusnQ
— Salaar (@caniyaar) October 23, 2022

Why was no ball not reviewed, then how can it not be a dead ball when Kohli was bowled on a free hit. #INDvPAK #T20worldcup22 pic.twitter.com/ZCti75oEbd
— Brad Hogg (@Brad_Hogg) October 23, 2022

After Karthik was stumped by an alert Mohammed Rizwan, Nawaz bowled a wide and Ravichandran Ashwin scored the most important boundary of his career. ‘Chak De India’ reverberating around the MCG never sounded sweeter and Kohli seemed numb. He punched ground, took a long walk back, showed thumbs up to the crowd having restored India’s supremacy at a global event.

Hardik Pandya, the most important cog in India’s T20 wheel, struck 40 off 37 balls in a partnership of 113. His ability to win matches for India coming under the scanner due to a prolonged lean patch, Kohli sang the perfect redemption song on the grandest stage.

It started in the 19th over when he sent one from Haris Rauf on his hunches and pulled off two back-to-back sixes. Cricket indeed is a leveller as Rauf, after 22 splendid deliveries bowled two bad ones and it changed the complexion of the game.

After Karthik was stumped by an alert Mohammed Rizwan, Nawaz bowled a wide and Ravichandran Ashwin scored the most important boundary of his career. ‘Chak De India’ reverberating around the MCG never sounded sweeter and Kohli seemed numb. He punched ground, took a long walk back, showed thumbs up to the crowd having restored India’s supremacy at a global event. But the script could have gone awry.

KL Rahul’s struggles against extreme pace and his distinct lack of footwork, Rohit Sharma and Suryakumar Yadav getting out cheaply did upset the rhythm that was set by Pandya and Arshdeep when they restricted Pakistan to 159 for 8.

In no time, India were 31 for 4 and Kohli and Pandya needed to consolidate for the next four overs without losing wicket. Pandya and Kohli, both disciples of the peerless Mahendra Singh Dhoni understand the grammar of chasing in T20 cricket and how to pace the innings. Only when leg-spinner Shadab Khan came into operation did Pandya chance his arm and sent him soaring into the stands. In Nawaz’s next over, Kohli gave him the same treatment while Pandya got his second six.

India needed 60 from last five overs but Rauf and Naseem gave only six runs each in the 16th and 17th over.

Exactly 364 days back, Babar and Rizwan had clinically decimated the Indian bowling attack for their biggest ever T20I victory against India. But with the MCG track remaining under cover for a couple of days due to rain and subsequent underlying moisture apart from a liberal tinge of green in and around the good length area meant the hit opening pair wasn’t supposed to make merry.

Rohit’s captaincy was spot-on as he didn’t bring Shami till the last over of Powerplay and brought a spinner (Ashwin) for the first time in the ninth over. At the start of the back-10, Iftikhar in a space of five balls, hit four sixes and Shami (1/25), coming back for his second spell trapped him plumb in-front with a fuller delivery to end the 76-run third-wicket stand.

Even after Iftikhar got out, Masood failed to force the pace. Pandya dismissed Shadab Khan, Haider Ali and Mohammed Nawaz in quick succession. Shaheen Shah Afridi’s lusty blows took Pakistan past 150-run mark but couldn’t save the day with ball.