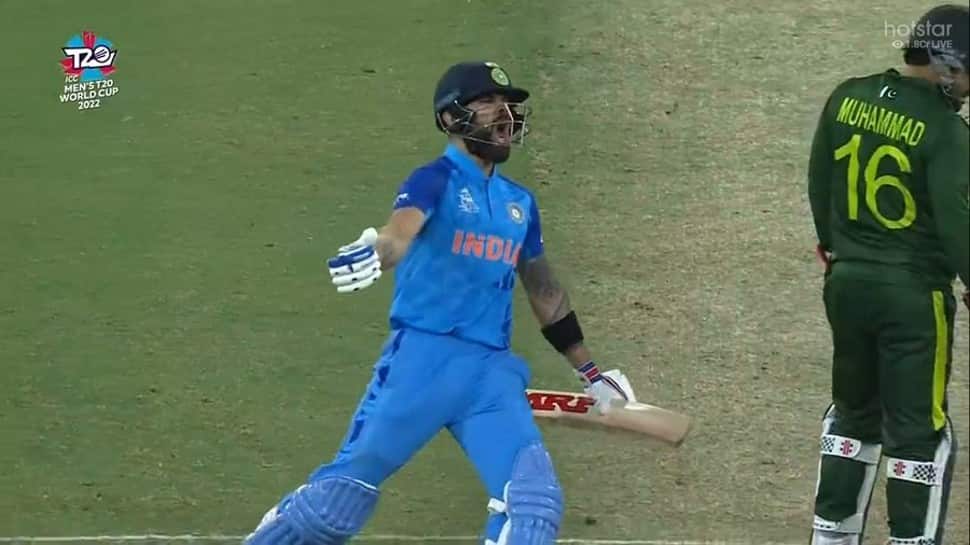 Virat Kohli’s sensational knock of 82 off 53 balls guided the Men in Blue to victory over arch-rivals Pakistan on Sunday (October 23) at the MCG. In what was a thriller contest between the two sides who were desperate to register their first win in their T20 World Cup 2022 opener, India lost both their openers KL Rahul and captain Rohit Sharma cheaply. The man in form Suryakumar Yadav took some pressure off but he was also trapped by the fine-pace attack of Pakistan. Later on, it was Hardik Pandya and Kohli who kept their cool and guided their team home.

The fast-bowling duo of Hardik Pandya and Arshdeep Singh picked three wickets each as Pakistan posted 159/8 in a topsy-turvy innings against India in a Super 12 match of the Men`s T20 World Cup at a sell-out Melbourne Cricket Ground on Sunday.

It was an innings where momentum oscillated between the two teams constantly. If India were good in the start thanks to Arshdeep`s new-ball burst, then Pakistan made a fightback with a 76-run partnership between Shan Masood (52 not out) and Iftikhar Ahmed (51) for the third wicket. India fought back in the end with a flurry of wickets to keep Pakistan a run below 160.

The KING is back

King Kohli, as his fans call him, conjured up a magical and memorable unbeaten 82-run knock to anchor a chase of 160 which became tricky after India were left in tatters at 31 for 4. Hardik Pandya, the most important cog in India’s T20 wheel, struck 40 off 37 balls in a partnership of 113. His ability to win matches for India coming under the scanner due to a prolonged lean patch, Kohli sang the perfect redemption song on the grandest stage.

It started in the 19th over when he sent one from Haris Rauf on his hunches and pulled off two back-to-back sixes. Cricket indeed is a leveller as Rauf, after 22 splendid deliveries bowled two bad ones and it changed the complexion of the game.

With 16 needed off last six balls, Pandya holed out off Mohammed Nawaz’s bowling and with rule of crossover non existent, Dinesh Karthik faced his first delivery and took a single.

With 14 needed off three balls, Nawaz’s juicy full-toss was dispatched for a six over square leg and it was called a no-ball after deliberation by on-field umpires.

Nawaz, the hero of Pakistan’s Super 4 victory in the Asia Cup, by then had lost his nerves.

After Karthik was stumped by an alert Mohammed Rizwan, Nawaz bowled a wide and Ravichandran Ashwin scored the most important boundary of his career. ‘Chak De India’ reverberating around the MCG never sounded sweeter and Kohli seemed numb. He punched ground, took a long walk back, showed thumbs up to the crowd having restored India’s supremacy at a global event. But the script could have gone awry.

KL Rahul’s struggles against extreme pace and his distinct lack of footwork, Rohit Sharma and Suryakumar Yadav getting out cheaply did upset the rhythm that was set by Pandya and Arshdeep when they restricted Pakistan to 159 for 8.

In no time, India were 31 for 4 and Kohli and Pandya needed to consolidate for the next four overs without losing wicket. Pandya and Kohli, both disciples of the peerless Mahendra Singh Dhoni understand the grammar of chasing in T20 cricket and how to pace the innings.

Only when leg-spinner Shadab Khan came into operation did Pandya chance his arm and sent him soaring into the stands. In Nawaz’s next over, Kohli gave him the same treatment while Pandya got his second six. India needed 60 from last five overs but Rauf and Naseem gave only six runs each in the 16th and 17th over.

Earlier, Arshdeep bowled a dream first spell and Pandya displayed his true worth in the back-10 as India restricted Pakistan to a manageable 159 for eight. Arshdeep (3/32) removed skipper Babar Azam (0) and Rizwan (4) in his first two overs to set the tone, Pandya (3/30) rekindled memories of his Asia Cup heroics by consistently hitting hard lengths at brisk pace, letting the pitch do the rest.

Iftikhar Ahmed (51) was the only batter who looked like taking the attack back to India as the spinners Ashwin and Axar Patel (1/21) did struggle a bit and it was designated sixth bowler Pandya who finished his full quota. Shan Masood (52) struck a half-century but never looked comfortable during his 42-ball knock.

Exactly 364 days back, Babar and Rizwan had clinically decimated the Indian bowling attack for their biggest ever T20I victory against India. But with the MCG track remaining under cover for a couple of days due to rain and subsequent underlying moisture apart from a liberal tinge of green in and around the good length area meant the hit opening pair wasn’t supposed to make merry.

Bhuvneshwar Kumar (1/22) and Arshdeep knew that all they needed to do was to pitch the ball up and let the track do the rest. Both bowl at an average speed of 130 kmph and they knew that their best chance to trouble the batters at that pace was to bowl fuller lengths.

A good first over by Bhuvneshwar where he consistently got late movement set the tone beautifully for Arshdeep to take over the baton and inflict a telling damage. It was the first delivery that Babar was facing and Arshdeep got a perfect inswinger that darted back enough to force the Pakistan captain play across the line. There was no doubt about the leg before decision.

Rizwan (4), who mostly played and missed, was dismissed when Arshdeep very cleverly slipped in a well-disguised short ball and Bhuvneshwar at fine-leg boundary took the easiest of catches.

Rohit’s captaincy was spot-on as he didn’t bring Shami till the last over of Powerplay and brought a spinner (Ashwin) for the first time in the ninth over. At the start of the back-10, Iftikhar in a space of five balls, hit four sixes and Shami (1/25), coming back for his second spell trapped him plumb in-front with a fuller delivery to end the 76-run third-wicket stand.

Even after Iftikhar got out, Masood failed to force the pace. Pandya dismissed Shadab Khan, Haider Ali and Mohammed Nawaz in quick succession. Shaheen Shah Afridi’s lusty blows took Pakistan past 150-run mark but couldn’t save the day with ball. (With PTI inputs)