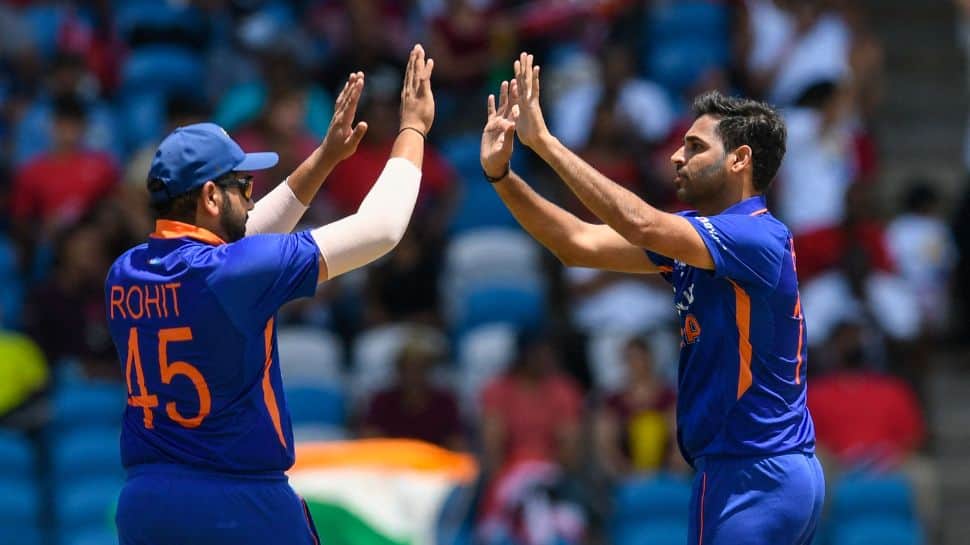 Indian captain Rohit Sharma’s fifty followed by Dinesh Karthik’s blistering innings helped India post a challenging total against West Indies and then allround bowling performance helped the visitors beat the Caribbean side by 68 runs in the first game of the five-match T20I series at Brian Lara Stadium on Friday. Rohit’s 64 off 44 and Karthik’s 41 not out off 19, propelled India to 190/6 in 20 overs, after they were invited to bat first. Apart from Rohit and Karthik, Suryakumar Yadav (24 off 16) was the other main contributor with the bat for India.

.@DineshKarthik played a stroke-filled knock of 41* off 19 balls & bagged the Player of the Match award as #TeamIndia beat West Indies in the first T20I. _ _

Chasing a challenging total, Kyle Mayers made his intent clear at the very start, going all guns blazing against the Indian pacers. However, he couldn’t last long, as Arshdeep Singh set him up with a short delivery. The move to send Jason Holder backfired as he was cleaned up by Ravindra Jadeja.

Shamarh Brooks was the next to depart, bowled by Bhuvneshwar Kumar. Ravichandran Ashwin also recovered from being hit for a few boundaries by getting the big scalp of Nicholas Pooran, as the hosts found themselves at 66/4.

It was a tall task for West Indies from there and the Indian spinners ensured that there was no miraculous chase on the cards. Ashwin took another wicket, while Ravi Bishnoi also bowled with great guile after being introduced into the attack.

Eventually, West Indies were restricted to 122-8 in 20 overs, losing by a huge margin. Ravichandran Ashwin (2/22), Arshdeep Singh (2/24) and Ravi Bishnoi (2/26) were the most successful bowlers for India.

Earlier, India tried out a new opening pair as Suryakumar Yadav came to start the innings along with Rohit. The duo put up a quickfire opening partnership of 44 runs off 28 balls before Suryakumar (24 off 16) got out to Akeal Hosein in the fifth over. Shreyas Iyer, who came to bat next departed for a duck in the 6th over as India ended the powerplay at 45/2.

The India captain was hitting regular boundaries, including a pull for a six off Joseph and helped India make good progress despite the couple of quick wickets. Pant also got into the act with a couple of boundaries off Keemo Paul but ended up edging the last ball of the 10th over to short third man to depart for 14 off 12, leaving India to 88/3.

Despite the wicket of Pant, Rohit remained positive and got to a 35-ball fifty with two successive fours off Joseph. But Hardik fell in the same over, ramping a short delivery to third-man where McCoy took a good catch.

With Rohit well set at the crease, India were hopeful of a big total but his stay at the crease was ended on a slower ball over courtesy a diving catch by Hetmyer. Jadeja ended the over with a boundary but he fell in the next over as India were 138/6 after 16 overs.

From there on, it was left to Karthik – the designated finisher- to do the job for India. The veteran justified his role and he along with R Ashwin (13 not out off 10) scored 21 and 15 runs in the 19th and 20th over respectively and took India to 190-6 in 20 overs.