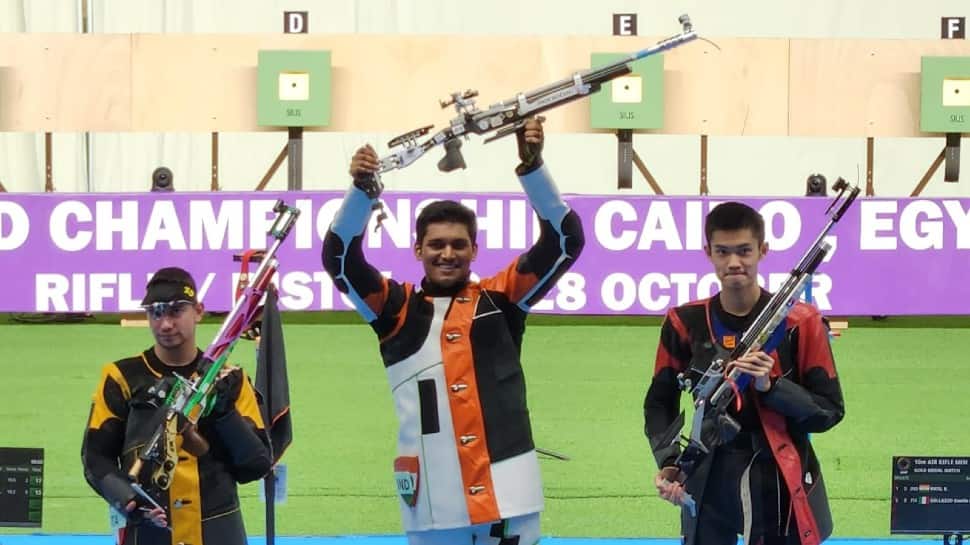 Bindra had won the crown in the same event in Zagreb in 2006. A National Rifle Association of India (NRAI) release said the Thane boy shot astoundingly well throughout competition day two of the International Shooting Sport Federation (ISSF) World Championship Rifle/Pistol at the Egypt International Olympic City (EIOC) shooting range, to not only win the biggest prize of his life till date but also a Paris 2024 Olympics quota for his country.

It was India’s second Paris quota in the sport of Shooting after Bhowneesh Mendiratta had won the first in the Men’s Trap at the Shotgun World Championships in Osijek, Croatia, which preceded the Cairo World Championships for Rifle and Pistol. Silver medallist at the Junior World Championships in Lima last year and a gold medallist at the Junior World Cup in Suhl earlier this year, this was Rudrankksh`s first medal at the senior level. He had broken through to the senior squad in the beginning of the year and had registered seventh and 11th-place finishes in the Baku and Cairo World Cups earlier.

Rudrankksh was detailed in the second qualification relay on the day and when he took his start, teammate Kiran Ankush Jadhav of the Indian Navy had already logged an impressive 630.6 in the first relay to lie third.With the top eight making it to the next ranking round, Rudrankksh sizzled with a 633.9 to top the high-quality field of 114 shooters.

Among those whom he left behind on the day were legends like Yang Haoran (double Olympic gold and double world champion) of China, reigning Olympic champion William Shanner of the USA, Chinese teenager and Tokyo Olympics silver medallist Lihao Sheng of China and Olympic medallists SerhiyKulhish of Ukraine and Alexis Raynaud of France. Also left behind was teammate Arjun Babuta, who shot 625.3 to finish in 22nd place. In the 25-shot ranking round broken down into five series of five shots each, Rudrankksh had a steady start moving up to fourth place after 10 shots with a score of 104.2.

Compatriot Kiran Jadhav, who had also made it to the top eight with a sixth-place finish overall in qualification, bowed out at this stage in eighth place along with Raynaud, who finished seventh.He shot into the lead after the third series of shots logging 157 to be 0.1 ahead of Italian Sollazzo and 0.7 ahead of Yang Haoran as the fifth and sixth-place shooters bowed out, assuring India of a Paris quota place.Patil continued to shine and a 10.8 for his 19th and a 10.3 for the 10th meant that he kept the lead after the fourth series as well. It was now 0.3 over the Italian and a full point ahead of Lihao Sheng who had caught up on countryman Haoran.

The Italian however had a strong final series and wrested the lead from the Indian at the end of it, but Rudrankksh still made it to the gold round, finishing 0.1 ahead of Lihao, who settled for bronze. Rudrankksh finished with 261.9 to Sollazzo`s 262.7.The gold medal match then turned out to be a dogfight. The two shooters shoot a single shot each and the winner is awarded two points while an equal score means they split a point each. The first to 16 points wins.

India’s juniors continued to impress as Udhayveer Sidhu and Esha Singh finished on top of the pile after the first qualification round of their 25m Pistol Men and Women Junior events. Udhayveer shot 290 in the first Precision round while Esha shot 294.In the Junior Men’s 25m Pistol, among the other Indians, Unish Holinder was lying 13th with 282 while Sameer logged 280 to lie 19th. Also in the Junior Women’s competition, Naamya Kapoor shot 283 to be in 18th spot, Vibhuti Bhatia 280 to be 21st, Khushi Kapoor 279 to be 24th and Divanshi shot 278 to lie in 25th position.

In the 50m Rifle Prone Mixed Team Junior competition, the pair of Nishchaland Surya Pratap Singh went down 6-16 in a bronze medal match to USA’s Katie Zaun and Rylan Kissell. They had on Thursday earned qualification to the match, by virtue of finishing fourth in stage two of qualification, with a score of 411.2. The second Indian pair of Nupur Kumrawat and Pankaj Mukheja bowed out in eighth place at that stage after coming through stage one along with their compatriots.

In the 50m Rifle 3 Positions Men Junior, India’s Sartaj Tiwana finished seventh with a score of 580 to qualify for the ranking round. Pankaj Mukheja and Surya Pratap Singh were 13th and 28th with scores of 577 and 570 respectively.