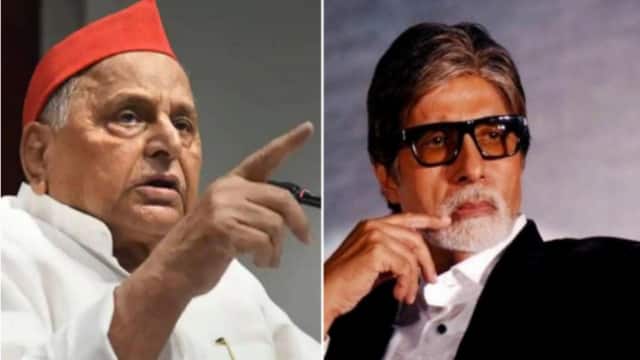 Today is Amitabh Bachchan’s birthday. The whole family wants to celebrate this day in a grand way. However, Jaya and Abhishek Bachchan meanwhile attended the funeral of former Uttar Pradesh Chief Minister Mulayam Singh Yadav, who died on Monday. Today i.e. Tuesday was the last rites of Mulayam Singh Yadav and Jaya and his son Abhishek also came to bid him last farewell. A video shared by ANI shows Abhishek and Jaya reaching the chief minister’s house in Saifai. Big B could not go with them.

However, during this there was such a crowd that Abhishek was seen protecting his mother. The police was also taking full care of their safety. Let us tell you that Jaya Bachchan has been a Rajya Sabha MP since 2004 on a Samajwadi Party ticket. The Bachchan and Yadav families have been very close since then. Let us inform that when Mulayam was the CM of UP, he started the grand Saifai Mahotsav in his native village, where the Bachchan family also used to attend.

Mulayam Singh was close to the Bachchan family

Talking to Aaj Tak on the death of Mulayam Singh, Jaya Bachchan said, ‘I am very sad today. I could talk to him about everything. Such was the bond between us. He was like an elder in the family to me. She also had a good relationship with my husband and kids.

Will go back and spend time with Big B

Abhishek and Jaya will now go back to Mumbai and spend time with Big B who is celebrating his 80th birthday today. Today the entire Bollywood industry is celebrating him. From young actors to veteran actors, everyone is congratulating Big B on this special day and praying for his long life.

Last night, Big B came out of his house and gave a big surprise to the fans. Fans who were standing outside his house were overjoyed to see a glimpse of Big B. Let us tell you that from yesterday till now, the fans of Big B are ready in the role of his films and someone is standing there with a gift.