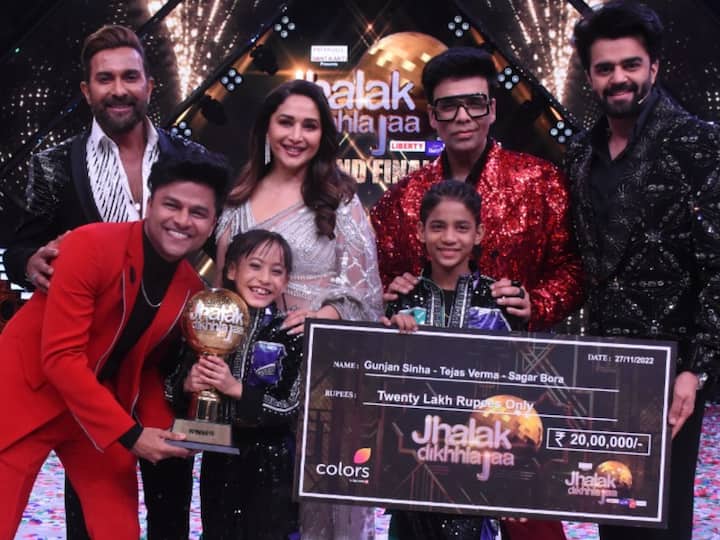 New Delhi: Grooving to the rhythm of their hearts, 15 celebrity contestants discovered their love for dance on ‘Jhalak Dikhhla Jaa’. Packed with spectacular performances, numerous emotions and unlimited entertainment, the 10th edition was truly a dance extravaganza. Having been regaled with a series of surprising new elements, the audience witnessed the journeys of their favourite celebrities from different walks of life as they fired up the dance floor every weekend.

Hosted by the multi-talented Maniesh Paul, their performances were critiqued by an illustrious panel of judges including the ever-graceful Madhuri Dixit Nene, the epitome of oomph, Karan Johar, and the international dance artist, Nora Fatehi.

While all the contestants brought their best in this epic dance battle, Gunjan Sinha and her dance partner Tejas Verma were crowned as the winners. The coveted trophy and a whopping Rs. 20 lakhs were bestowed to the winners and their choreographer Sagar Bora by the judges in the presence of special guests Varun Dhawan and Kriti Sanon.

Despite being the youngest celebrity contestant, Gunjan and her dance partner Tejas gave a tough fight to the rest of the competitors. Owing to their impeccable maiden performance, they were the judges’ favourite since the launch of the season. Each act by the feisty little winners was flawless and garnered tremendous appreciation from the judges. They enjoyed unanimous support from all her co-contestants, who cheered heartily for her victory in the ultimate dance battle.

The grand finale episode saw the finest contenders of this season in their absolute best form after the semi-finale that captured the celebration of Kajol Devgan’s legacy and Vicky Kaushal revealing his childhood crush. As the curtain was about to be drawn on the season, actors Varun Dhawan and Kriti Sanon joined the celebrations and spread the ‘Bhediya’ fever. It was an exceptional night for Kriti, who got to shake a leg with Madhuri on the song ‘Badi Mushkil’. Making the finale super special was when the dance battle united with India’s most talked about reality show ‘Bigg Boss 16’. This union witnessed judge Madhuri Dixit Nene and Dabangg host Salman Khan recreating an iconic scene from their hit movie ‘Hum Aapke Hain Koun’.

To everyone’s surprise, the finalist of the show Rubina Dilaik announced the result as a tie between both the best judges. The season concluded on a bittersweet and emotional note, as it paid tribute to judge Karan Johar showcasing a glimpse of his entire journey from taking charge of his family to becoming a filmmaker.