Mahakal city is also free from the ravages of holocaust, PM Modi told the specialty of Ujjain by dedicating ‘Mahakal Lok’ 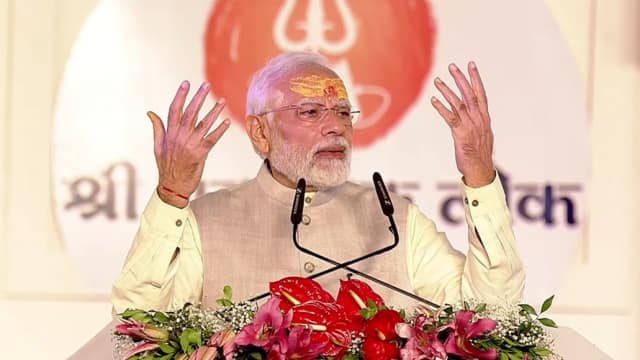 After the launch of ‘Shri Mahakal Lok’, PM Modi also mentioned the specialty of Ujjain along with its features. Describing the glory of the city of Mahakaleshwar and Ujjain, the Prime Minister said that there are 84 Shivalingas, four Mahaviras, six Vinayaks, eight Bhairav, Ashta Matrika, Navagraha, 10 Vishnu, 11 Rudra, 12 Adityas, 24 Devis and 88 pilgrimages, with Rajadhiraja in the center. Shri Mahakal is seated.

He said that there is nothing secular in ‘Mahakal Lok’. There is nothing ordinary in the company of Shankar. Everything is supernatural, extraordinary, unforgettable and unbelievable. The city of Mahakal is also free from the ravages of catastrophe. This is the place where Lord Krishna took his education. Ujjain has been the center of faith of India.

If you get the blessings of Mahakal, then the lines of time get erased.

Modi said that when Mahakal is pleased with our austerity and faith, then such a grand form is created by his blessings and when we get the blessings of Mahakal, the lines of Kaal get erased.

History is limited in every moment of Ujjain. Spirituality is contained in every particle and divine energy is being transmitted in every corner. Ujjain has led India’s prosperity and prosperity, wisdom and dignity and literature for thousands of years.

Ujjain is that city, which is counted as one of our holy seven puris. This is the city where Lord Krishna also came and took education. Ujjain has seen the glory of Maharaja Vikramaditya, who started the new golden age of India.

The Prime Minister said that there is a sentence in our scriptures – Shivam Jnanam, which means Shiva is knowledge and knowledge is Shiva. The supreme vision of the universe lies in the vision of Shiva. Which is Shiva ‘Soyam Bhuti Vibhushanah’. That is, the one who wears the ashes, he is also ‘sarvadhip: always’. That is, He is also immortal and indestructible. Therefore, where there is a Mahakal, there are no boundaries of periods.

There are 108 pillars in Mahakal Lok of 910 meters

108 pillars have been built in the newly constructed corridor of Mahakal temple, 910 meters of this entire Mahakal Lok rests on these pillars. The concept of Mahakal forest has been beautifully presented in Mahakavi Kalidasa’s epic Meghdoot, it has been realized here after hundreds of years.

The ‘Mahakal Lok’ corridor is spread around the old Rudra Sagar lake. The Rudra Sagar Lake has been revived under the project of redevelopment of the area around the world famous Mahakaleshwar Temple in Ujjain.

Two grand entrance gates – Nandi Gate and Pinaki Gate have been built for the corridor. This corridor leads to the entrance of the temple and on the way there is a panoramic view. Both the grand entrance gates, a majestic pillar of 108 ornate pillars intricately carved out of sandstone, fountains and a series of over 50 murals depicting stories from the Shiva Puranas will grace the ‘Mahakal Lok’.

It is noteworthy that one of the 12 Jyotirlingas of the country, the Mahakaleshwar temple is located in Ujjain and a large number of devotees from all over the country and abroad come here.

Earlier, Prime Minister Modi had inaugurated the first phase of Kashi Vishwanath Dham in December 2021 which has been built at a cost of around Rs 339 crore. The old temple complex has been extensively modified and has grand entrance gates and beautiful arches in four directions.