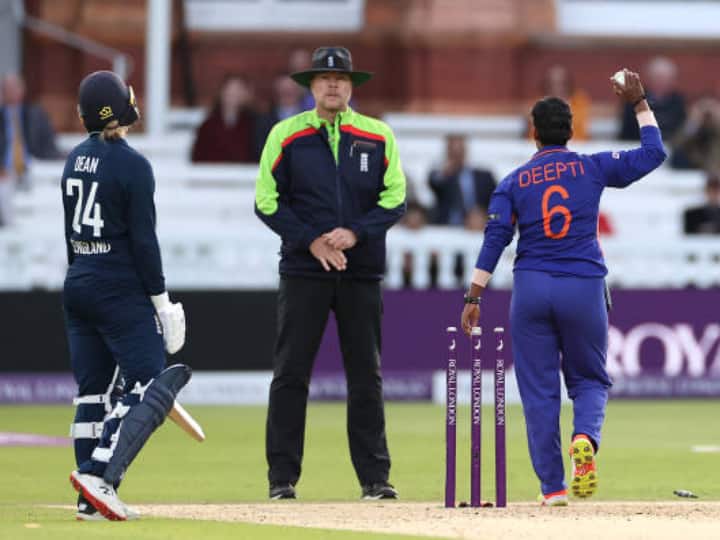 New Delhi: A huge controversy erupted after India’s Deepti Sharma got England batter Charlotte Dean ‘mankad run-out’ during the Lords’ One-Day-International match (Ind vs Eng 3rd ODI) between India women’s cricket team and England women’s cricket team on Saturday. The incident sparked a massive debate on social media. While India skipper Harmanpreet Kaur defended her player’s rule, saying what happend was within the rules, several former and current England players criticized Charlotte Dean’s dismissal with ‘Spirit of Cricket’ statements. In the 44th over of England’s chase, team India’s Deepti Sharma ‘mankaded’ Dean at the non-striker’s end as she noticed the England batter was backing up too far.

MCC, the lawmaker of cricket, reiterated that Elgar’s run-out by Deepti Sharma happened well within the laws of the game.

“This change will formally come into effect from 1 October 2022. This was done to clarify this matter and to place an onus on batters to ensure that they do not leave the crease at the non-striker’s end, prior to a bowler releasing the ball. The Law is clear, as it needs to be for all umpires to be able to easily interpret throughout all levels of the game and at all moments in the game.

Cricket is a broad church and the spirit by which it is played is no different. As custodians of the Spirit of Cricket, MCC appreciates its application is interpreted differently across the globe.

Respectful debate is healthy and should continue, as where one person sees the bowler as breaching the Spirit in such examples, another will point at the non-striker gaining an unfair advantage by leaving their ground early.

MCC’s message to non-strikers continues to be to remain in their ground until they have seen the ball leave the bowler’s hand. Then dismissals, such as the one seen yesterday, cannot happen.

Whilst yesterday was indeed an unusual end to an exciting match, it was properly officiated and should not be considered as anything more.”