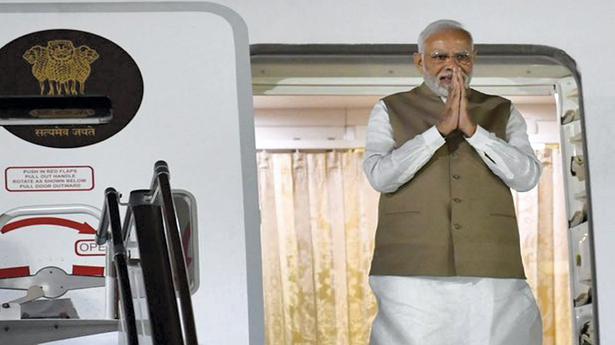 Mr. Modi was the last of the leaders of eight SCO members and seven invitees to arrive in Samarkand, and missed both the Pre-Summit dinner hosted by Uzbekistan President Shovkat Mirziyoyev and tree-planting ceremony that all the leaders other than President Xi undertook, leading to speculation that Mr. Modi’s late arrival was meant to avoid any inconvenient “photo-ops” while relations with China and Pakistan remain tense.

The entire process to elect a new Congress president is and will always be “open” and the party has nothing to hide, chairman of the party’s Central Election Authority, Madhusudan Mistry, said on Thursday. The clarification came after a section of the media reported that the Pradesh Congress Committees would authorise the Gandhis to pick a new party chief.

On the sidelines of SCO, all eyes on Russia-India-China ties

While a Russia-India-China trilateral summit, that had been outlooked by Kremlin officials last December is considered unlikely to happen on Friday given continuing tensions in India-China ties, experts say Mr. Putin could also play a role in “encouraging” Prime Minister Narendra Modi and Mr. Xi to resolve differences over the military stand-off at the Line of Actual Control.

“Lots many things have been said about everything, including listing and other things. Let me clarify it is true that we have taken this new style, a new way of listing. There are naturally bound to have some problems. Whatever has been reported is not the correct state of affairs. We all judges are completely on the same page,” said Chief Justice U.U. Lalit.

Opposition leaders across the political spectrum on Thursday slammed the Yogi Adityanath government over the rape and murder of two Dalit girls in Uttar Pradesh’s Lakhimpur Kheri, with Congress leader Rahul Gandhi saying women’s security cannot be expected from those facilitating the release of rapists.

Pulling up States for the delay in completion of the Narendra Modi government’s flagship rural household scheme — Pradhan Mantri Awas Yojana (Gramin)— the Union Ministry of Rural Development has come up with a set of penalties that the State governments will have to bear for any further delay. Opposition-ruled West Bengal, Chhattisgarh and Odisha along with BJP-ruled Assam are the leading four laggard States who are far behind their targets.

Aim is conciliation with all armed groups in northeast: Amit Shah

Union Home Minister Amit Shah said on Thursday that it was the government’s aim to resolve inter-boundary disputes in the northeast and strike a conciliation with all armed insurgent groups in the region before 2024. Mr. Shah was speaking at the signing of a tripartite memorandum of settlement between the Government of India, the Assam government and eight armed Adivasi groups of Assam.

What is “so principally, so fundamentally wrong” in singling out economic criterion for grant of reservation, a Constitution Bench of the Supreme Court headed by Chief Justice of India U.U. Lalit asked on its third day of hearing petitions challenging the 103rd Constitutional Amendment, which introduced 10% quota for ‘economically weaker sections’ (EWS) of society. EWS quota makes persons with less than ₹8 lakh gross annual family income eligible. The quota excludes Backward Classes, Scheduled Castes, Scheduled Tribes and Other Backward Classes, who form ‘homogenous groups’ included in the prevalent 50% reservation granted separately.

Death toll in Armenia-Azerbaijan border clashes rises to over 170

The clashes ended “thanks to the international involvement” overnight on Thursday, Armenia’s security council said, after earlier failed attempts from Russia to broker a truce.

The automobile industry, on its part, has set a target of becoming near 100% self-reliant in the entire manufacturing value chain by 2047, while also becoming one of the two largest producers in every segment of automobiles in the world. The industry, however, added that a long-term regulatory roadmap is among the key enablers that can be helpful in better planning of investments, technologies and product development.

Fitch also slashed global growth forecasts to 2.4% for 2022 from 2.9% in view of the European gas crisis, high inflation and a sharp acceleration in the pace of global monetary policy tightening that is taking a heavy toll on economic prospects.

The 41-year-old, who won 20 Grand Slam singles titles and re-defined a sport with his artistry and grace, broke the news tennis fans across the world have long feared in a lengthy statement on Thursday.

“I wish this day would have never come… it’s a sad day for me personally and for sports people around the world. I said it to you when we spoke and now it’s here. It’s been a pleasure but also an honor and privilege to share all these years with you, living so many amazing moments on and off the court.” — Rafael Nadal, a 22-time Grand Slam champion and one of Federer’s biggest rivals on the court.