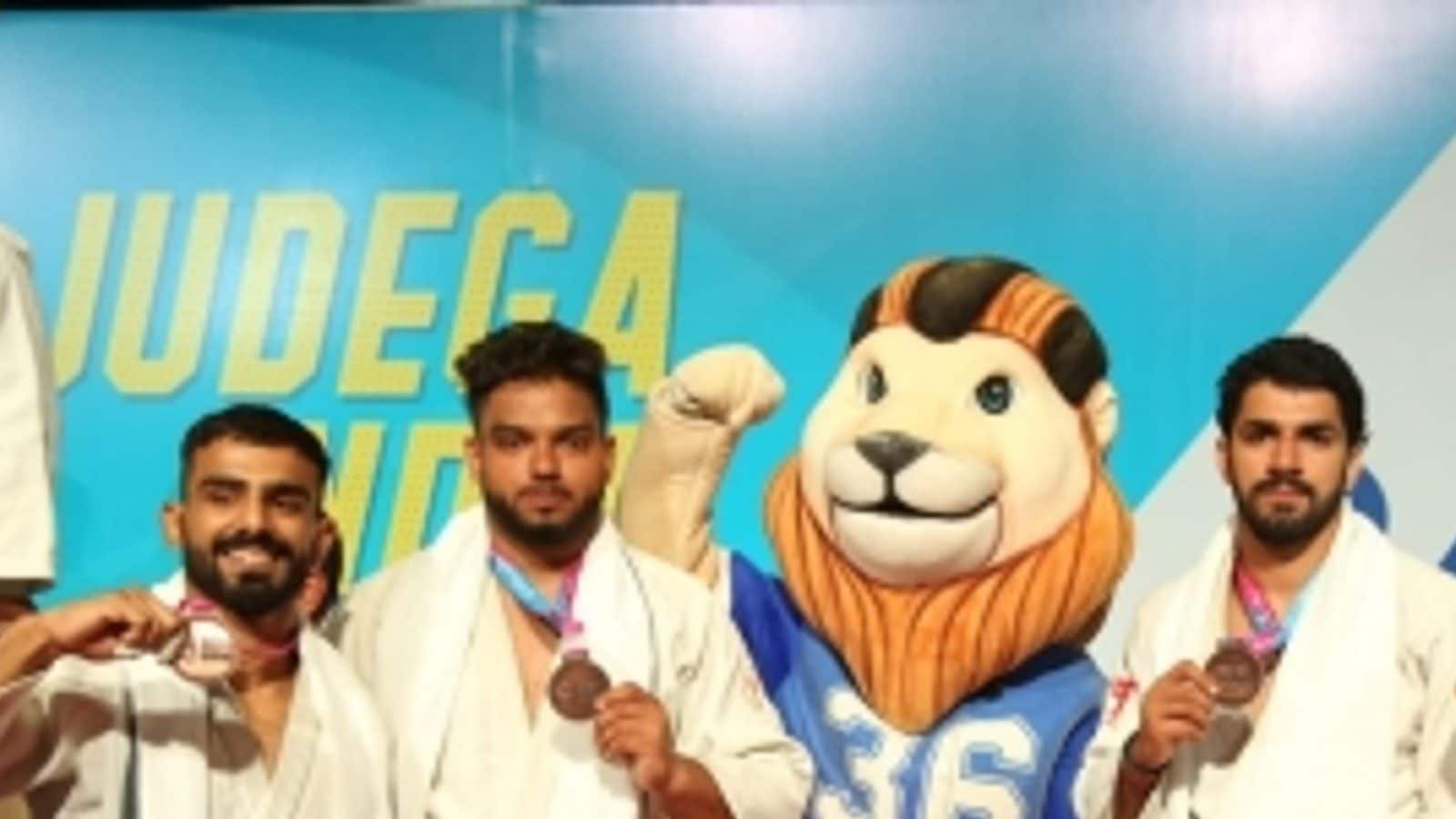 Services are unassailable at the top and all set to win the Raja Bhalindra Singh Trophy as the champion team in the National Games for the fourth time in succession. Maharashtra and Haryana are engaged in a keen battle for the second spot while Karnataka, Tamil Nadu and Kerala are in a contest of their own as the 36th National Games is heading for a finish on Tuesday.

And yet, the spotlight was well and truly on the wushu arena in the Mahatma Mandir complex where Abhishek Jamwal, who won Jammu and Kashmir’s first gold medal, as well as on Ladakh’s Owais Sarwar Ahengar who became the first two medallists for the Union Territory who are competing in the National Games for the first time.

Services added three gold to their collection and remain on top of the charts with 56 gold, 34 silver and 30 bronze medals for a total of 120.

Maharashtra hold a four-gold lead over Haryana, thanks to the addition of the softball men’s title and the domination of the Yogasana Artistic Group medals on Tuesday. Haryana, who won gold through Ravi Panchal in wushu here and the women’s hockey team in Rajkot, will hope that success in the boxing ring on Wednesday would help them regain second place behind Services.

Karnataka and Haryana lived up to their ranking to claim the men’s and women’s hockey gold medals respectively in the Maj. Dhyan Chand Hockey Stadium in Rajkot.

Karnataka beat Uttar Pradesh via the sudden death tiebreaker after the teams were locked 2-2 in regulation time and scored four goals apiece in the penalty shootout. Haryana women regained the trophy, edging out their arch-rivals Punjab by a solitary goal, scored by the redoubtable Rani Rampal.

Karnataka’s victory in the men’s hockey final via the sudden-death was their 27th gold medal and helped them retain the edge over Tamil Nadu in the race for the fourth spot. Though Tamil Nadu gained a gold through their Mixed Team in triathlon and Kerala picked up two canoeing and kayaking gold medals on Tuesday, Karnataka stayed ahead.

Hosts Gujarat have registered their best show in National Games by bagging 47 medals including 13 gold, 15 silver and 19 bronze. There was a dramatic Triathlon Mixed Relay silver for the hosts. Teenager Krishiv Hitesh Patel braved a broken toe to finish the cycling and running legs.

Tamil Nadu’s Akash Perumalsamy, S. Keerthi, S. Vaman and S. Aarthi did not look the gift horse in its mouth in winning a surprise Triathlon gold. Krishiv Patel’s crash during the cycling leg and his broken toe slowed him down considerably and despite the brave efforts by Monika Nagpure and Pragnya Mohan, Tamil Nadu won by a 41-second margin.

Kerala were hoping to win the men’s football gold but West Bengal had other ideas. They left none in doubt about their superiority with a 5-0 hammering of Kerala in the title clash. Naro Hari Shrestha scored a hat-trick for West Bengal against the error-prone team from the southern state. Surajit Hansda and Amit Chakraborty accounted for the other goals.

Maharashtra first defeated Andhra Pradesh 3-0 in the men’s softball final to take on Chhattisgarh in the gold medal match, called the Grand Final. They then beat Chhattisgarh 1-0 to take gold. Earlier, Punjab expectedly emerged as the women’s champions with a 6-2 conquest of Kerala 6-2 in the Grand Final. Kerala had beaten Chhattisgarh 2-1 to try and unseat Punjab.

Tokyo 2020 bronze medallist Lovlina Borgohain as well as Commonwealth Games medallists Mohammed Hussamuddin and Jaismine Lamboria registered easy victories to storm into the boxing finals. Eight Haryana pugilists have made it to finals and will be expected to help the state vault past Maharashtra on the overall medal table.

Earlier in the day, the 28-year-old Abhishek Jamwal’s determination to go back from here with only the gold medal came through. Having lost in the quarterfinal stage in the last two National Championships after changing to the 56kg category with an eye on next year’s Asian Games, he is now hoping that the success will lead him to better things in life, including a job.