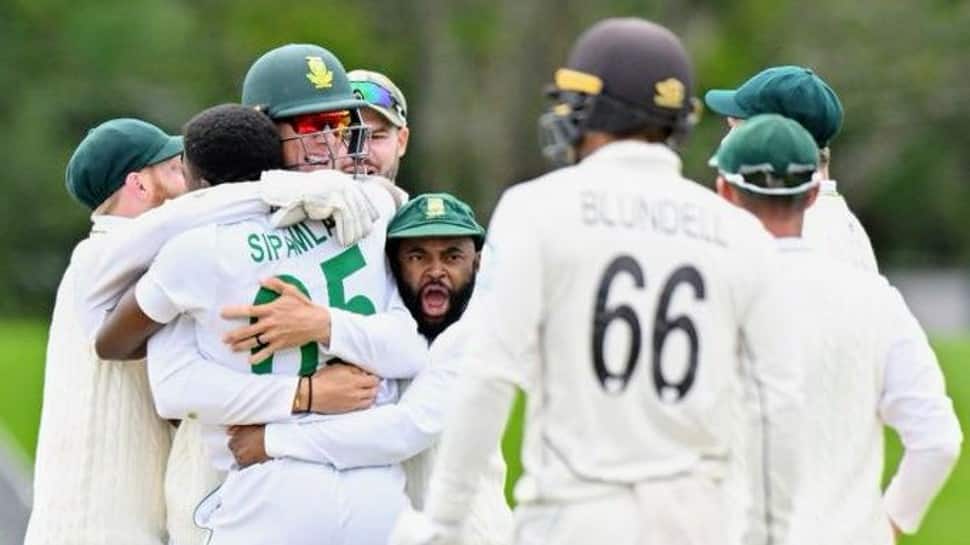 South Africa turned the tables on New Zealand with an emphatic 198-run victory in the second test in Christchurch on Tuesday, crushing the hosts’ hopes of a maiden series win over the Proteas. Having suffered their second-worst test defeat in the first meeting in Christchurch, South Africa rebounded superbly at Hagley Oval, dismissing the Black Caps for 227 in their second innings just after tea on day five.

Chasing a would-be world record victory target of 426 runs, New Zealand resumed on 94 for four in the morning and there was a flicker of hope of saving the match as they reached lunch at 180 for five. However, the resistance was broken when wicketkeeper Tom Blundell (44) and all-rounder Colin de Grandhomme (18) surrendered with loose shots after the break, and the Black Caps bowed out losing 6-61.

South Africa’s pace spearhead Kagiso Rabada was Man of the Match after taking eight wickets and blasting 47 runs in the second innings as the tourists piled on 354 for nine declared to set up the win. “It’s never easy playing against New Zealand and we knew what we had to do … I’m glad that we could get the job done,” said Rabada.

“In the first test we completely didn`t rock up … We knew we had to win this one, at least to make it 1-1.” Rabada’s pace comrade Marco Jansen grabbed three final-day wickets to finish with seven for the match, while spinner Keshav Maharaj was influential with 3-75 in the second innings.

Having demolished South Africa by an innings and 276 runs in the opener, New Zealand needed only draw the match to complete their first series win over the Proteas and end 90 years of frustration dating back to the teams’ first in 1931/32. But their top order was routed twice, leaving them chasing the game after South Africa’s batsmen opened with 364 after winning the toss, having managed only 206 in total in the series-opener at the same ground.

“It’s obviously not the outcome we were hoping for,” said New Zealand’s stand-in captain and opener Tom Latham, who was dismissed for a duck and one by Rabada in the rematch. “We knew South Africa were going to be at their best and fair credit to them, they played fantastically well.”

New Zealand seamer Matt Henry was named Player of the Series, having topped the wickets list with 14 at an average of 16.14 ahead of Rabada, who snared 10. The Black Caps fought hard in the morning session, with number three Devon Conway pushing for his fourth test century, but South Africa’s third seamer Lutho Sipamla trapped him lbw for 92, ending an 85-run partnership with Blundell.

Jansen broke the game open with three quick wickets after lunch, with both Blundell and De Grandhomme culpable in their dismissals as they pulled the rangy seamer straight to fielders. Jansen and Rabada worked through the tail to bring South Africa within a wicket of victory before an untimely rain shower frustrated the Proteas by bringing an early tea-break. It was only a brief stay of execution for New Zealand, with Maharaj wrapping up the win by dismissing Henry lbw for a duck soon after the break.