‘No tears left’, Roger Federer breaks down in farewell speech after loss in his last match, Rafael Nadal too gets emotional – WATCH 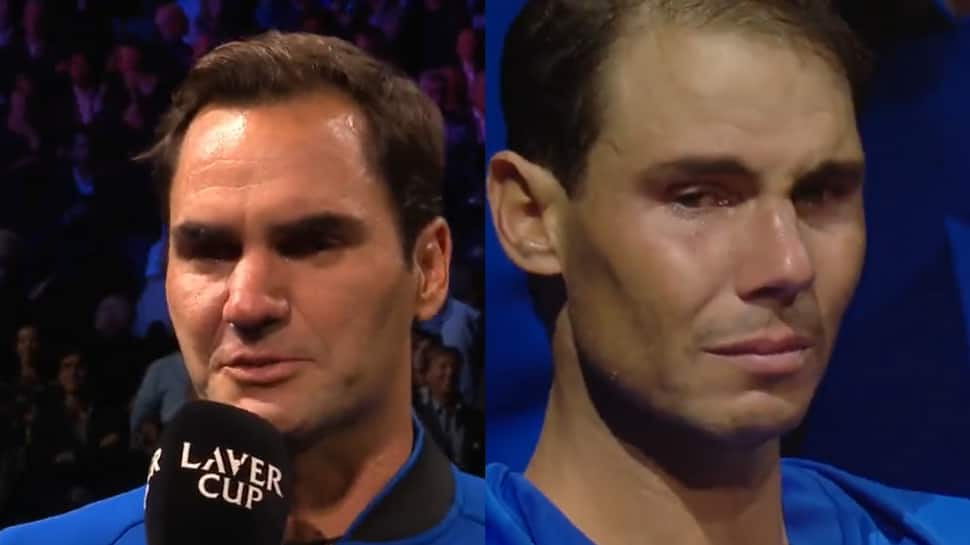 Roger Federer was a bundle of emotions when the time came to make a speech after his career’s last match, a doubles contest with Rafael Nadal by his side came to an end. The Nadal-Federer pair lost the match to Team World’s Jack Sock and Frances Tiafoe 4-6 7-6 11-9 later on Friday night. Post the match, Federer shook hands with all the players in his team and Team World and got too emotional. He had said, in the pre match press conference, that he did not want it to be his farewell game to be a ‘funeral’ where everyone is crying. But then, when the moment finally came, the Swiss great could not handle his emotions.

“I had so many people cheering me on. My family is here tonight. I had so much fun over the last so many years, my wife has supported. She could have stopped me a long time ago but she did not. She allowed me to play. Without my mum, I would not be here, thank you to her and my dad. It has been incredible, my god,” said Federer as he tried to control his tears.

The fans could not control their emotions too, and poured their heart out on Twitter. Take a look at some reactions.

this is the most depressing clip ive ever seen. taping his racket for one last time_ pic.twitter.com/auNfVOHe1x
— mimi_____| i love roger federer (@rafastefbaes) September 23, 2022

I have no tears left. None.

The fact that Rafael Nadal, his longest rival till date could not handle his emotions and was in tears, made the night even more teary. Even Novak Djokovic had tears in his eyes as he leaned to Federer and lowered his head to hide his emotions.

American duo Sock and Tiafoe, pantomime villains for the night, tested Federer’s reactions with some lusty blows aimed at the Swiss maestro who would have demanded nothing less. Federer was equal to pretty much everything though, his silky shot-making and nimble footwork very much intact despite such a long time away from the match court.

The pair with a combined age of 77 and 42 Grand Slam titles between them edged the opening set by breaking Tiafoe’s serve. Despite the party atmosphere in the stadium, there was no danger of Federer’s farewell match turning into an exhibition.

It was a tough game of tennis in Federer’s farewell match and at the end, everyone shed a tear of two to bid good bye to one of the greatest athletes of all time.