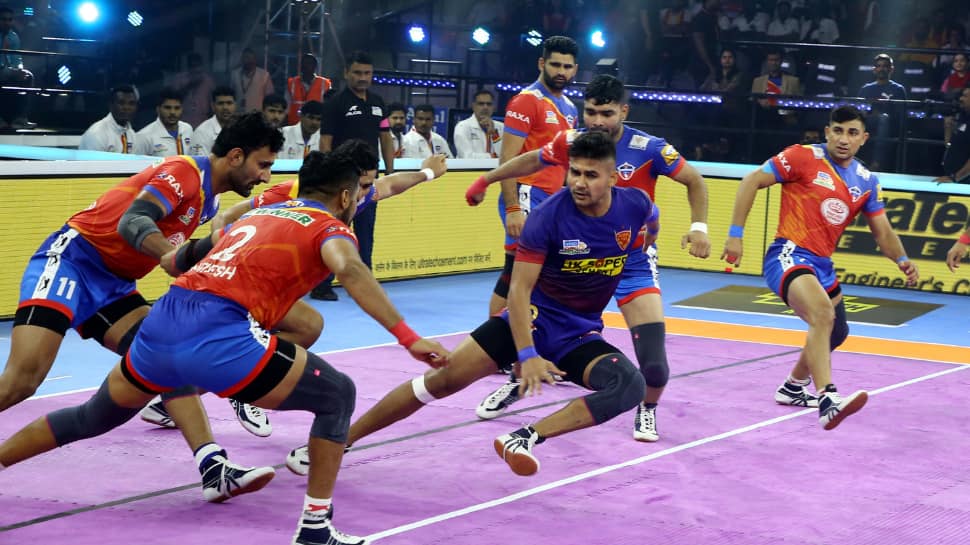 Dabang Delhi KC launched a stunning second half comeback to snatch victory against UP Yoddhas 44-42 in the second game of the evening at the Shree Kanteerava Indoor Stadium in Bengaluru on Wednesday. Dabang Delhi’s Naveen Kumar (13 points) and Manjeet (12 points) starred for the winning team while Surender Gill picked up 21 points for the Yoddhas in a losing effort. Billed as a clash between UP Yoddhas’ record-reaking raider Pardeep Narwal and Delhi’s young phenomenon Naveen Kumar, the action did not disappoint. It was the Yoddhas defence, who, in the early stages, looked impenetrable and had Delhi on the ropes. They initiated the first ALL OUT of the game with just seven minutes gone to take a commanding 11-4 lead.

At the other end Gill constantly picked up points for the Yoddhas and ensured they built on their commanding lead. At 18-10 they inflicted another ALL OUT, making it seem like the contest was all but over, with barely a quarter of the game gone.

And yet, Delhi kept chipping away, Naveen constantly getting bonus points with almost every raid. In the dying seconds of the first half, with the last raid, Manjeet pulled off a SUPER RAID catching four UP Yoddhas to ensure his team had reduced the deficit going into half time.

Manjeet’s SUPER RAID galvanised the Delhi team out of a stupor, and they came into the second half a different unit completely, dominating the proceedings from the word go. UP Yoddhas’ blushes were saved, only because of the brilliance of Surender Gill, whose two successful raids as the last man on the mat ensured his team didn’t suffer an ALL OUT.

Eventually though, the ALL OUT did come, and helped Delhi get their heads back into the game. From thereon, Naveen came alive, catching the Yoddhas defenders with almost every raid, and soon enough initiating another ALL OUT to help his team take the lead for the first time in the game at 37-36.

Thereafter, the two teams kept trading the lead, never extending by one point. However, two crucial errors right at the end, first by Gill and second by Narwal, ensured the Dabang Delhi KC pulled off a spectacular comeback to keep their winning streak alive.