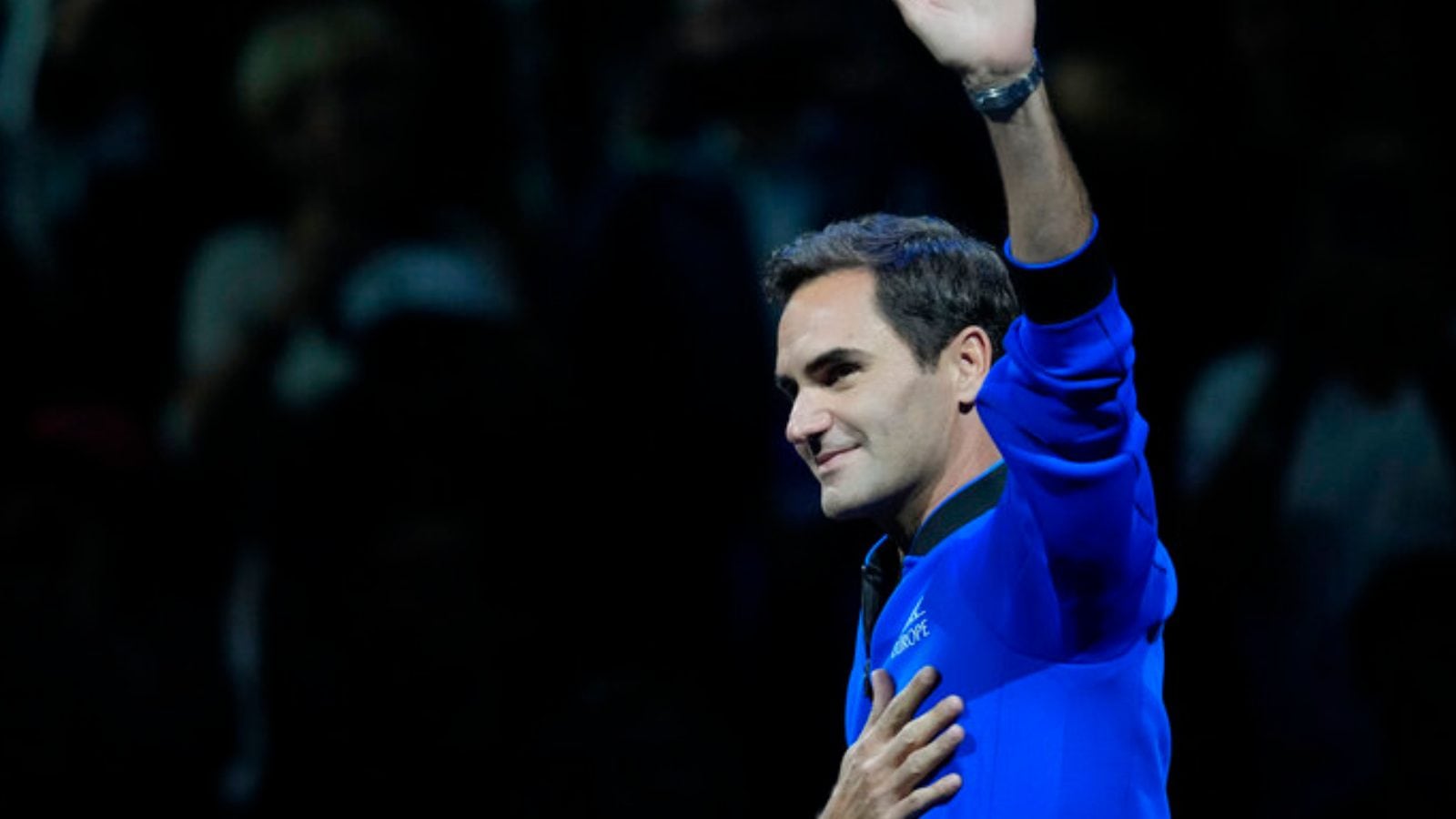 More than 19 years after winning his first Grand Slam title at Wimbledon in 2003, which set him on the road to being acclaimed as the greatest player of all time, Federer in the early hours of Saturday bade farewell to tennis.

He was unable to finish with a victory, losing his doubles match for Team Europe at the Laver Cup alongside long-time rival Rafael Nadal.

At the age of 41 and trying to recover from a third knee surgery in 18 months, the great Swiss has bowed to the inevitable march of time.

He leaves the sport with 20 Grand Slams, including eight Wimbledons, 103 titles and more than $130 million in prize money alone, all driven by a rare grace, laser precision and a signature one-handed backhand.

Self-confidence was never an issue — who else could have walked on to Wimbledon Centre Court sporting a bespoke cream blazer with an embroidered crest?

The artistry associated with the Swiss brought him a global legion of fans bedecked in ‘RF’ hats and gave him an aura that few attain.

A columnist once famously even penned a gushing article headlined “Federer as Religious Experience”.

Federer also held the world number one spot for 310 weeks, including 237 consecutive weeks between February 2004 and August 2008.

His net worth was estimated in 2019 at $450 million and such is the cash-register recognition of the Federer brand that in 2018, he penned a 10-year, $300 million deal with clothing manufacturer Uniqlo.

“I threw the kitchen sink at him but he went to the bathroom and got his tub,” sighed an exhausted Andy Roddick after losing the 2004 Wimbledon final.

Off court, however, he is Federer the family man, the father of two sets of twins, Myla Rose and Charlene Riva and Leo and Lenny with wife Mirka, a former player he met at the 2000 Olympics in Sydney.

His path to super-stardom was not always so settled.

As a talented young player, Federer’s hair-trigger temper threatened to stunt his progress.

“I had a tough time getting my act together out on court, trying to behave properly. For me that was a big deal,” he admitted.

Twelve months later, however, Federer exited Wimbledon in the first round.

It took a personal tragedy for him to press the reset button.

Just before he turned 21, his coach and close friend from his formative years, Peter Carter, was killed in a car crash in South Africa.

From that point on, the multi-lingual Federer committed himself to winning in style, no longer consumed by his inner demons.

His first extended rest, to recover from a knee injury caused by running a bath for his two daughters, led to a 2017 renaissance, with a refreshed Federer winning an 18th major at the Australian Open.

It was after the first of his Australian Open titles in 2004 that he claimed the world number one ranking for the first time.

He won 28 Masters, a 2008 Olympic doubles gold medal with close friend Stan Wawrinka and a Davis Cup victory for Switzerland in 2014.

Had he not competed in the same era as Nadal, who has 22 majors, and Novak Djokovic, his trophy collection could have been more impressive.

Nadal, who has forged a close relationship with Federer, enjoyed a 24-16 head-to-head advantage.

Against Djokovic, with whom dealings were never as cordial as with the equally revered Nadal, Federer trailed 27-23.

They shared history in 2019 when the Serb triumphed in the longest-ever Wimbledon final of all time, just three minutes short of five hours.

Since that day, Djokovic has also equalled and surpassed his 20-Slam mark and beaten his record for weeks at number one.

Despite the impressive numbers racked up over more than two decades, Federer admitted he still battled serious nerves before a big tennis occasion.

“Sometimes it slows down your legs, your pulse starts racing… that can stress you out a tad,” he said.

“I always say I’m happy I feel that way because it means I care. It’s not like going through the motions. That would be a horrible feeling, to be honest.”

On the eve of his shattering defeat to Djokovic in the 2019 Wimbledon final, Federer said he had not set any date for retiring.

“It’s just discussions I always have with my wife about the family, about my kids, is everybody happy on tour, are we happy to pack up and go on tour for five, six, seven weeks. Are we willing to do that?” he said.

“For the time being, it seems like absolutely no problem, which is wonderful.”

However, with a year lost to injury and the Covid-19 pandemic as well as a stalled comeback in 2021, Federer’s “wonderful time” has finally ended.