Rupee falls to all time low of ₹77.93 against U.S. dollar 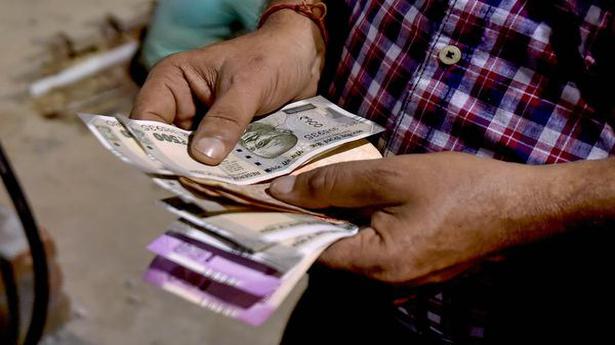 ‘Risk sentiment high amid concerns about price pressures, reimposition of some lockdown curbs in China’

‘Risk sentiment high amid concerns about price pressures, reimposition of some lockdown curbs in China’

The Indian rupee on Friday hit a record low against the U.S. dollar following flight of capital on account of Foreign Portfolio Investors (FPIs) pulling out of the equity market and likely outflow of dollar to pay for rising oil prices.

At the inter-bank exchange, the Indian Rupee dipped 19 paise to 77.93 against the dollar compared with its previous close of 77.74 on Thursday, which was the previous record low.

“The rupee has slumped to a new record low after a prolonged phase of consolidation as risk sentiments have soured amid concerns about acute price pressures and the re-imposition of some lockdown restrictions in China,” said Sugandha Sachdeva, vice president – Commodity and Currency Research, Religare Broking Ltd.

She said the rise in crude prices towards three-month highs owing to supply tightness was further accentuating inflation concerns and inflicting damage on the global economy, which was already strained by the monetary policy tightening path of major central banks and the Russia-Ukraine crisis.

“Besides, the World Bank has slashed its global growth forecast to 2.9% as against its previous estimate of 4.1% in January. These are the key headwinds playing out in the current scenario for the domestic currency and leading to a flight of foreign capital flows while increasing the demand for the safe-haven dollar,” she said.

Markets, she said, were now looking forward to the U.S. CPI data as well as the Fed’s next meeting when a 50 bps increase in rates is expected to be announced, the third increase in a row by the U.S. central bank to rein in decades-high inflation.

“As of now, we envisage the rupee to depreciate towards the 78.20 mark in the near term and 78.50 from a medium-term perspective,” Ms. Sachdeva said..

“Geopolitical tensions and soareing inflation have increased economic uncertainty and concerns around growth. Although, RBI has started taking steps to curb inflation and control liquidity, the strengthening of dollar has nullified the impact,” he said.

“However, in view of the robust forex reserves and fiscal tightening measures, the rupee doesn’t seem to depreciate much from the current levels. The resistance stands around 78 levels and it’s unlikely that the level will break in near term,” he added.