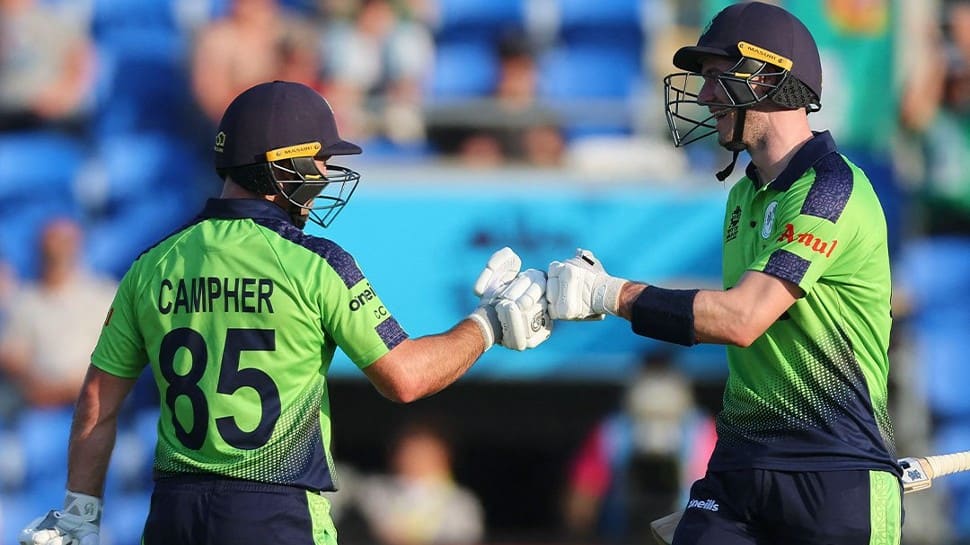 Curtis Campher belted an unbeaten 72 from 32 deliveries to lead Ireland to a six-wicket win over Scotland on Wednesday that opened up Group B at the T20 World Cup 2022. Scotland upset two-time champion West Indies in the group opener on Monday and was in control of its second game with Ireland struggling at 61-4 in the 10th over chasing 177 to win.

That’s where Campher and George Dockrell dug in, combining in an unbroken 119-run fifth-wicket stand that turned the game around at Bellerive Oval. Ireland steadily eroded the target to the point where the equation was 12 runs needed from the last 12 balls. Campher ensured the victory, and posted Ireland’s highest-ever individual score at the T20 World Cup, with three straight boundaries to lift the total to 180-4 and finish off the 19th over. Dockrell finished unbeaten on 39 from 27 balls.

Ireland, which lost its opening game to Zimbabwe, moved into a tie with Scotland and Zimbabwe on points. The top two teams in each of the preliminary-round groups advance to the Super 12 stage next week. West Indies won the toss and elected to bat in the night match against Zimbabwe.

Campher said his aim when Ireland lost two wicket within five deliveries in the 9th and 10th overs was just to back himself. “I had a clear game plan: Just take the game deep, go with my options,” he said. “Lucky today was my day.”

Ireland skipper Andy Balbirnie said his team was motivated after getting close too many times but not quite getting the result. “It was pretty special, I can’t remember an important partnership as that,” he said of the Campher-Dockrell stand. “We started the tournament a bit disappointingly. To be able to drag it back and stay in this competition is really important for us.”

After losing George Munsey in the second over, Scotland’s batting was solid. Michael Jones posted 86 from 55 deliveries with six boundaries and four sixes, including one onto the stadium roof. He shared a 59-run stand with Matthew Cross (29) and 77 with skipper Richie Berrington (37) to set the foundations for Scotland’s total of 176-5.

“We certainly put Ireland under pressure early on,” Berrington said. “You’ve got to give Ireland credit. Exceptional knock from Curtis Campher. These group situations are never straight forward. We’ll come back strong in the last game against Zimbabwe.”

India and Pakistan are scheduled to meet Sunday in the Super 12 round in front of a capacity crowd at the Melbourne Cricket Ground. Defending champion Australia and New Zealand meet in a grand final rematch on Saturday to open the second phase of the tournament.