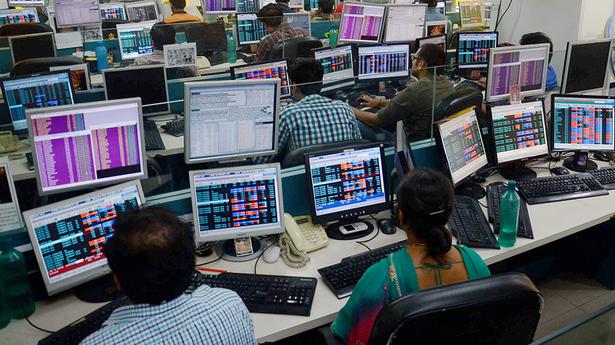 Equity benchmark Sensex slumped over 1,000 points to sink below the 55,000-level on Friday, tracking deep losses in IT, finance, banking and energy stocks amid widespread selling in the global markets.

On the other hand, Asian Paints, UltraTech Cement, Dr Reddy’s, Titan and IndusInd Bank were among the gainers.

Sector-wise, BSE IT, teck, bankex, finance and oil & gas lost up to 2.09%, while telecom logged gains.

According to rating agency Icra, operating profit margins of information technology companies can moderate by up to 1.50% in the near term as wage cost inflation coming on the back of high attrition hits players in the over $200 billion industry.

In the broader markets, the BSE midcap, large-cap and smallcap gauges slipped much as 1.72%.

The rupee declined 11 paise to close at a record low of ₹77.85 (provisional) against the U.S. dollar on Friday.

Following a massive sell-off in the U.S. market, bourses in Tokyo, Hong Kong, and Seoul ended sharply lower, while Shanghai settled in the green.

The basket of crude oil that India buys has hit a decade high of $121 per barrel, but retail selling prices of petrol and diesel continue to remain frozen.

The Indian basket on June 9 touched USD 121.28, matching levels seen in February/March 2012, according to data available from the oil ministry’s Petroleum Planning and Analysis Cell (PPAC).

Foreign institutional investors (FIIs) remained net sellers in the capital market, as they sold shares worth ₹1,512.64 crore on Thursday, as per exchange data.