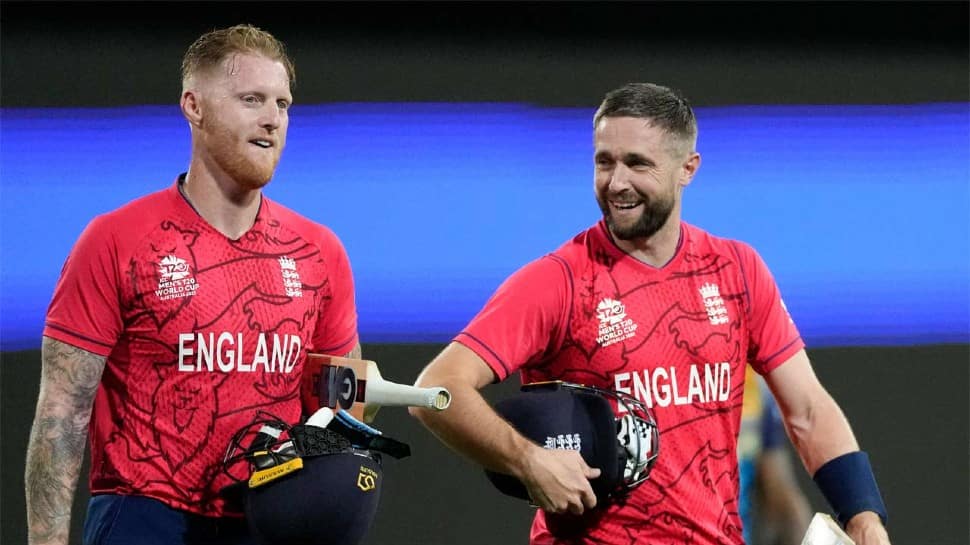 England survived Sri Lanka in the 2nd innings courtesy a brilliant start from openers Alex Hales and Jos Buttler who scored 70 runs in the powerplay. Later on, it was Ben Stokes who kept his cool in the death overs and won the match England by 4 wickets to seal the spot for the semi finals of the T20 World Cup 2022. With this win, England has finished the group stage in the second position in points table, with three wins in five matches and a total of seven points. They have qualified for the semifinal along with New Zealand.

Australia, which also has seven points like England and NZ, have been knocked out of the tournament due to an inferior net run-rate. Chasing 142, England was off to a blazing start. Alex Hales and skipper Jos Buttler were dealing in fours and sixes, with Buttler being slightly cautious. The duo brought up their 50-run stand in just 30 balls. At the end of the powerplay in six overs, England was at 70/0, with Hales (42*) and Buttler (25*) unbeaten at the crease.

Wanindu Hasanranga put an end to 75-run stand between Buttler and Hales by dismissing the former for 28 runs off 23 balls after he was caught by Chamika Karunaratne at deep-midwicket. Hasaranga put a roadblock on England`s chase yet again by dismissing Hales for 47 off 30 balls. At the end of 10 overs, England was at 86/2, with Ben Stokes (5*) and Harry Brook (3*) unbeaten. Dhananjaya de Silva continued to tilt momentum in favour of Sri Lanka as he caught and bowled Harry Brook for just four, reducing England to 93/3. England crossed the 100-run mark in 12.2 overs.

Medium pacer Lahiru Kumara dismissed Liam Livingstone for 4 runs. England was 106/4 in 13.1 overs and seemed to have been derailed from the chase after a strong start by openers. de Silva took his second wicket of the match by dismissing Moeen Ali for just one. Half of England`s batting line-up was inside the pavilion for 111 runs. In 15 overs, England was at 113/5, with Stokes (25*) joined by Sam Curran (1*).

Though England continued to put runs on the board, the road ahead was not really smooth as Curran was dismissed for six runs off 11 balls by Kumara, who took his second wicket of the match. England was 129/6, needing 13 runs in the final two overs. England managed to get to their target, finishing their innings at 144/6 in 19.4 overs, with Stokes (42*) and Chris Woakes (4*) unbeaten. Kumara, de Silva (2/24) each and Hasaranga (2/23) gave England a scare of their lifetime, but it was not enough to stop them from reaching the semifinals.

Earlier, a half-century from Pathum Nissanka helped Sri Lanka reach a fighting total of 141/8 in their 20 overs against England in their final Group 1, Super 12 match of the ICC T20 World Cup in Sydney on Saturday. Nissanka (67 off 45 balls) posted a solid half-century on the board, but barely got support from other Lankan batters.

Mark Wood (3/26) was the pick of the bowlers for England. Opting to bat first, openers Kusal Mendis and Pathum Nissanka gave Sri Lanka a solid start. England got their first wicket after Mendis was dismissed for 18 off 14 while attempting a pull which was caught by Liam Livingstone at deep backward square leg.

SL was 39/1 in four overs, courtesy of all-rounder Chris Woakes. Dhananjaya de Silva was the next batter on the crease. SL crossed the 50-run mark in 4.5 overs. At the end of the powerplay in six overs, Sri Lanka was at 54/1, with Nissanka (32*) and Silva (2*). Pacer Sam Curran intervened to remove de Silva for 9 after the batter holed one out to deep midwicket and was caught by Ben Stokes.

Sri Lanka was 72/2. Charith Asalanka was the next batter to join Mendis. Halfway through the innings, SL was 80/2, with Nissanka (45*) and Asalanka (5*). Stokes delivered another jolt to Lankans by sending back Asalanka for 8, with the help of Livingstone who took yet another great catch. SL was down three at 84 runs.

Nissanka continued his fine form in the tournament, bringing up his second half-century of the tournament and his ninth overall in 20-over format within just 33 balls. He was joined by hard-hitting Bhanuka Rajapaksa.

Lankans crossed the 100-run mark in 12.5 overs.At the end of 15 overs, Sri Lanka was at 116/3, with Nissanka (66*) and Rajapaksa (13*)In the 16th over, spinner Adil Rashid put an end to Nissanka`s knock of 67 off 45 balls, consisting of two fours and five sixes. Skipper Dasun Shanaka was also dismissed cheaply for 3 by pacer Mark Wood.

Half of the Lankan side was in the pavilion for 127 runs.Wanindu Hasaranga was next on the crease to help take SL through the remainder of their innings without any damage. Wood also took the scalp of Rajapaksa for 22 off 22 balls while Hasaranga was run out for 9. Theekshana was dismissed for a duck at the final ball of the innings.SL finished their innings at 141/8 in their 20 overs.Wood (3/26) was the leading bowler for Sri Lanka. Curran, Rashid, Stokes or Woakes took a wicket each.