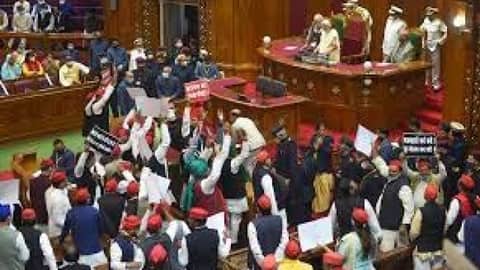 The hearing in the Gyanvapi Masjid dispute case is to be held in the district court for the first time today. The case will be open in the district judge’s court. The hearing of this case can be done daily as the Supreme Court has directed the district court to complete the hearing in 8 weeks. At the same time, the first session of the 18th Legislative Assembly of Uttar Pradesh started with an uproar. Even before the Governor Anandiben Patel’s address, the members started creating ruckus in the House. Chief Minister Yogi Adityanath and Assembly Speaker Satish Mahana have appealed to all the parties to run the House in a peaceful manner. Earlier, Azam Khan and son took the oath of Legislature.

Mahant reached the court, will file a petition for worship and make-up

In the Gyanvapi Masjid case, former Mahant Dr. VC Tiwari has reached the court to file a case for the right to worship, make-up etc. He claimed that there are still more Shiva lingas in the basement.

Governor said – work has been done on 20 irrigation projects

The Governor said that work has been done on 20 irrigation projects. Important steps are being taken in the field of defense production; Emphasis is being laid on setting up of enterprises. The government schemes have been doing a good job.

The Governor said that the campaigns brought a change in the lives of the people. Work was done on 70 new colleges. Emphasis was given on self-employment schemes in the country, the poor were given free houses. He said that Amrit Sarovar lakes were developed. Ganga is also becoming pollution free.

Governor said – fast work is being done for development

Air services have been improved in UP: Governor said

Governor Anandiben Patel’s address continued amid the uproar. Governor Anandiben Patel said that people have got a home in PM’s residence. The work of Defense Corridor is going on in full swing. Air services in UP were improved. 5 International airports were built. Action was taken against more than 2,000 land mafia.

The First session of the 18th UP Assembly commenced today pic.twitter.com/oDKYLrdSI3

Hearing in Gyanvapi case at 2 pm

Hearing in Gyanvapi case will start at 2 pm in Varanasi district court. It was prepared.

Before the start of the budget session, Yogi appealed to the opposition to maintain dignity

Yogi Adityanath welcomed all the members before the start of the budget session. Yogi said that the first session of the 18th Assembly is going to start. Yogi said that the budget to be presented on May 26 will be in the interest of the people of UP. The budget will bring a change in the lives of the people of UP. The government is there to answer all questions. Serious and effective debate is welcome in the House. Yogi has appealed to the opposition to maintain dignity.

Before the start of the budget session of the assembly, the socialist legislators started a ruckus outside the house regarding the rising inflation.

Azam Khan took oath of assembly membership. Assembly Speaker Satish Mahana administered the oath in his chamber. Azam did not talk to the media. He went to the SP Legislature Office with the SP MLAs. From here he will come to the house at 11 o’clock.

Security beefed up for Gyanvapi hearing

The hearing in the Gyanvapi case will be held at 11 am. Ahead of the hearing, police force has been deployed in and around the court premises for security.

Jail released SP MLA Azam Khan while going from Rampur to Lucknow said that my life is in danger. In the jail, I was asked by the inspector to stay underground.

up vidhan sabha budget session: BJP will be stronger in the Legislative Council

The party position of the ruling Bharatiya Janata Party in the Uttar Pradesh Legislative Council will further strengthen. At present, the BJP has a total of 66 members in this Upper House. Apart from these, there is one member from BJP’s ally Apna Dal S and one from Nishad Party. In this way, there are total 68 members of BJP and allies in the house. On April 27 and May 6, due to the completion of the term of six nominated members of the Samajwadi Party in the Legislative Council, six seats in the House have become vacant.

Till now this hearing was going on in the Court of Civil Judge (Senior Division). On the objection of the respondent Anjuman Intejamiya Masjid Committee, the Supreme Court had asked the District Judge to hear on Friday. After the order of the Supreme Court, the files, reports and evidence related to the case were handed over to the district judge’s court on Saturday. Court commission proceedings were held in Gyanvapi campus for five days in two phases on the orders of the court. His report has been submitted to the court. Respondent Anjuman Intejamiya Committee filed an application in the Supreme Court, questioning the maintainability of the case and requested for dismissal of the suit. The Supreme Court directed the district judge to hear the entire matter.

Azam Khan told reporters on Sunday that the assembly is not a new place for me. For the tenth time I will cross the threshold of the assembly. There is no question of not going there, people have elected me and I will go to the assembly again and again to raise voice for their rights. I am trying to go to take oath of membership of the assembly, but my health is also not good.

‘Kanhaiyalal’s accused had links with BJP, NIA should increase the scope of investigation’, alleges Rajasthan Congress

Koffee with Karan: Ranveer Singh, furious over this question of Karan Johar, said this while leaving the show