UP Yoddhas vs Dabang Delhi Live Streaming: When and Where to Watch Pro Kabaddi League Season 9 Live Coverage on Live TV Online 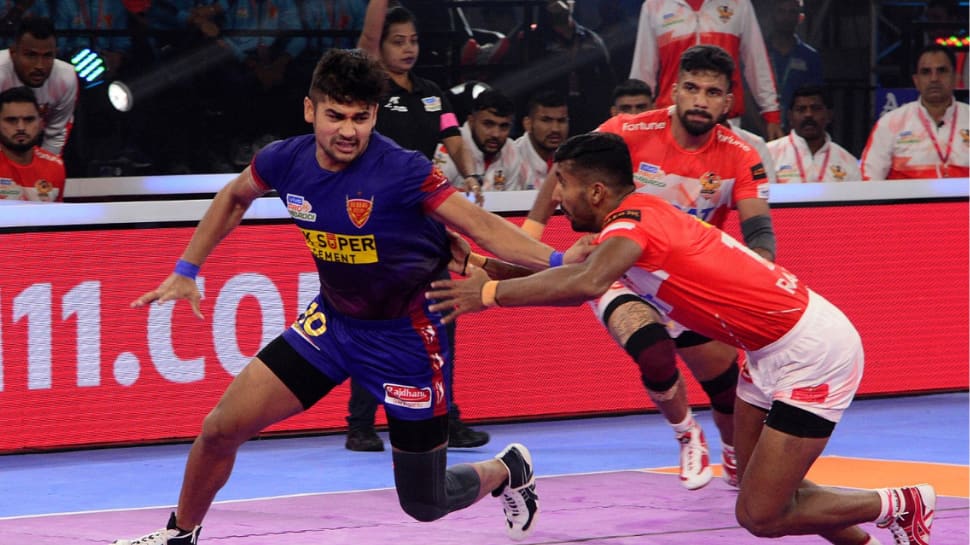 The Dabang Delhi captain Naveen Kumar put up another fantastic performance with 15 points to help his team defeat Gujarat Giants 53-33 in the Pro Kabaddi League Season 9 at the Shree Kanteerava Indoor Stadium in Bengaluru on Monday. Speaking about being the first team to record more than 50 points in the season, Naveen said, “We are really happy with our performance. The defense unit is playing really well this season. They have improved a lot and we registered a win with a big margin as well. Our coach keeps giving us confidence. We’ll keep trying to play like this in the future as well.”

Delhi’s young defender Krishan also made a vital contribution with 7 points. When asked about his rise as a kabaddi player, Dabang Delhi KC Head Coach Krishan Hooda said, “Krishan is a player from the New Young Player (NYP) programme. Naveen, who is also an NYP product, performed so well in his first season. Krishan is performing very well and he is playing with a lot of confidence as well. He has a great future and he will get better in the upcoming matches.”

UP Yoddhas clashed twice against Dabang Delhi KC in season 8, where the the former won once and lost the other. On both these occasions Star Raider Pardeep Narwal and Surender Gill came out on the top earning the highest points for UP Yoddhas, while the defenders played a balanced game. However historically UP Yoddhas have the stats in their favour as both the teams have faced each other seven times so far in the Pro Kabaddi League history, where they have won five times while Dabang Delhi KC have managed to win only twice.

Moving forward in the game scheduled for tomorrow between UP Yoddhas and Dabang Delhi KC, Raiders Pardeep Narwal and Surender would look forward to repeat their heroics, as even in this season they have been impressive so far. The defensive unit being led by Captain Nitesh Kumar would want to return to form as they have been rusty in the first two games this season, however they definitely showed spark as a unit in their last game against U Mumba where they managed two super tackles in difficult situations.

On what date will the Pro Kabbadi League matches between UP Yoddha vs Dabang Delhi be played?

The Pro Kabbadi League matches between UP Yoddha vs Dabang Delhi will be played on Wednesday, October 12.

Where will the matches between UP Yoddha vs Dabang Delhi be played?

The Pro Kabbadi League matches on Tuesday will be played at Sree Kanteerava Stadium in Bengaluru.

When will the matches between UP Yoddha vs Dabang Delhi be played?

The Pro Kabbadi League match between Bengaluru Bulls and Bengal Warriors will begin at 8:30 pm IST.

Which TV channels will broadcast the Pro Kabbadi League 2022 matches?

The Pro Kabbadi League matches will be telecast live on the Star Sports Network in India.

How do I watch the live streaming of the Pro Kabbadi League 2022 matches?

The Pro Kabbadi League matches will be streamed live on the Disney+Hotstar app and website.