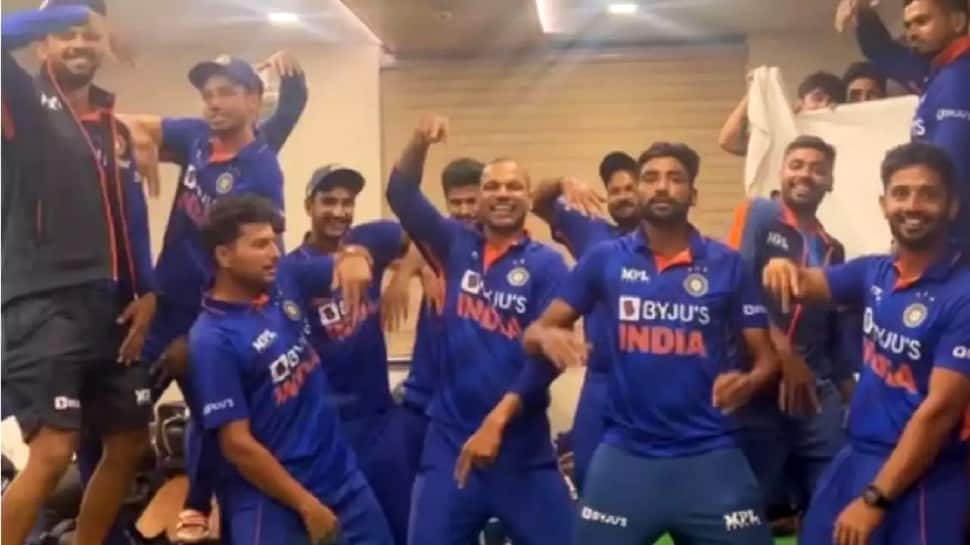 The three-match ODI series between India and South Africa was hard-fought with the home side led by Shikhar Dhawan finally coming out on top 2-1 after a comprehensive seven-wicket win in third ODI in New Delhi on Tuesday (October 11). After the game got over, Dhawan and the Team India cricketers let their hair loose in the dressing room of Arun Jaitley Stadium in a video that went viral on social media.

Following the game, captain Dhawan won the hearts of cricket fans by posting an adorable video of him leading the celebrations. Dhawan and the rest of the Indian team did an energetic dance celebration on a Bollywood song by Daler Mahendi. Dhawan captioned his post as ‘Jeet ke bolo Tara ra ra.’

Stand-in coach VVS Laxman shared the behind the scene video of the reel and hailed the camaraderie in the team. “@SDhawan25 leading the team not just on the field, but off the field as well. Brilliant camaraderie among the boys, great to watch. Bolo Tara Ra ra,” wrote Laxman on Twitter.

. @SDhawan25 leading the team not just on the field, but off the field as well.

With India wrapping up the ODI series against South Africa 2-1 after a seven-wicket victory in the Delhi match on Tuesday, Indian skipper Dhawan expressed happiness with his team’s performance saying the batters showed great character on such tough batting pitches and the bowlers were clinical in the match held in New Delhi. Four-wicket haul from spinner Kuldeep Yadav and vital contributions from other Indian bowlers powered India to defeat South Africa by seven wickets in the third and final ODI of the series.

“I am proud of the boys, the way they played in the series. The way they carried the responsibility and showed maturity. Would like to thank the support staff. We showed a lot of character in the first game, we dropped a few catches, but we never really put pressure on ourselves. We tried to stick to the process. I am enjoying the journey, I will try to keep performing well for my team. The boys showed great character on such tough batting pitches. The bowlers were clinical today,” said Dhawan in a post-match presentation.

South Africa were bowled out for a paltry 99 in 27.1 overs. Kuldeep Yadav was the pick of the bowlers as he scalped four wickets for 18 runs. He was ably assisted by Washington Sundar (2/15) and Mohammad Siraj (2/17). Shahbaz Ahmed also took two wickets and gave away 32 runs.Heinrich Klaasen scored 34 runs, but none of the other batters could stay long on the crease.

India comfortably chased the target in 19.1 overs with opener Shubman Gill (49) and Shreyas Iyer (28 n.o.) making major contributions. Kuldeep Yadav got ‘Man of the Match’ award for his spell of 4/18. Pacer Mohammad Siraj was given the ‘Man of the Series’ award for his consistent performance in the series. He took five wickets in three matches at an average of 20.80 and an economy rate of 4.52.