When artistes perform for the planet You hear the sound of the tambura along with birds chirping and gurgling water, as musicians perform in carefully curated natural, outdoor settings. Filmed across India, First Edition Arts’ (FEA) Blue Planet series hopes to highlight the connect between environment and art.

Started in 2014, FEA was one of the earliest with online musical offerings. Now, it will use the digital medium again to offer viewers a multi-layered experience. While each episode is primarily a concert, woven in are vignettes of people and their issues from the places where the programmes are filmed .

By setting musicians in locales such as forests, groves and water bodies, FEA hopes it will pull the classical arts ecosystem out of its insular bubble. According to Devina Dutt of FEA, the inspiration was the citizen-spurred environmental campaign, ‘Amche Mollem’, in Goa, which recently won the Sanctuary Wildlife Campaign award. “It was this campaign’s use of the visual arts to protest the clearing of forests for infrastructure projects that crystallised the idea of Blue Planet.”

The episode featuring ‘A Carnatic Quartet’ alternates between the stark urban devastation of Ennore and North Chennai with the fragile beauty of Pulicat and the mangroves. In Nagaland, singer T.M. Krishna talks to Sethrichem Sangtam, a grassroots activist from Tuensang, one of India’s most backward districts, where Sangtam describes the challenges of jhoom (slash and burn) cultivation and his efforts to encourage the community to switch to more sustainable agricultural practices. 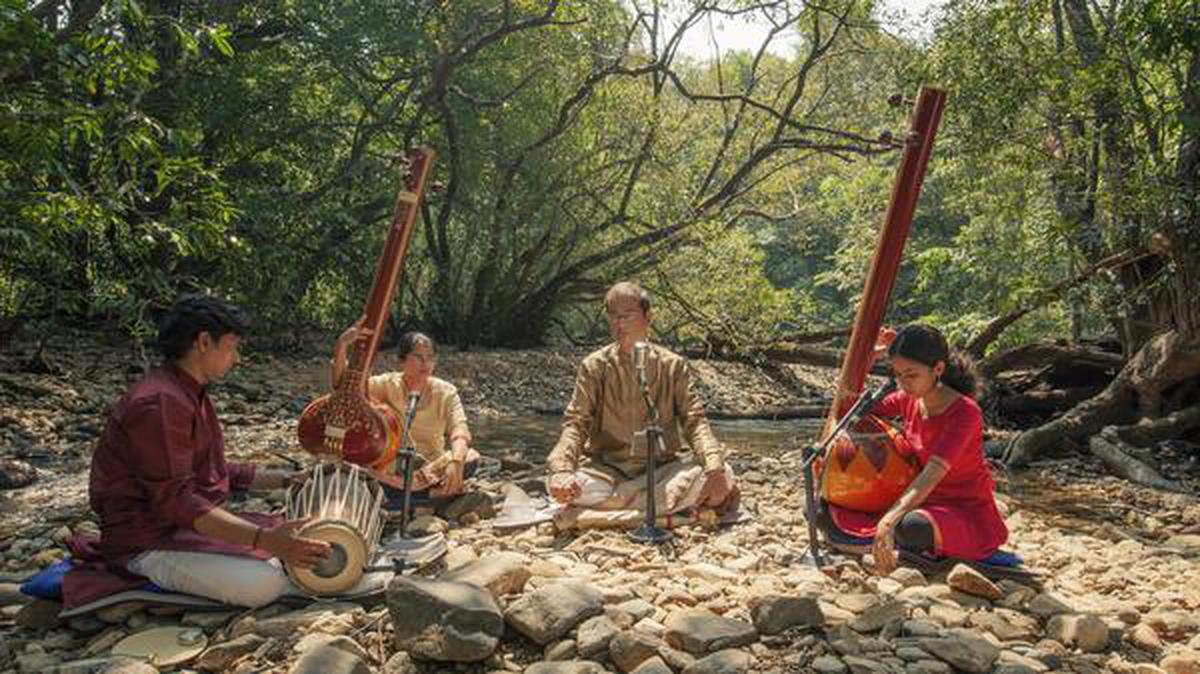 To showcase issues caused by the recent extreme weather patterns, the Malladi Brothers will be filmed on Urur Olcott Beach. K.S. Vishnudev’s episode will be filmed in the Gurukula sanctuary in Wayanad, a 60-acre painstakingly nurtured rainforest habitat that preserves flora and fauna. Ramakrishnan Murthy’s episode is set in the tide pools of Goa where marine conservationist Gabriella D’Cruz explains the importance of seaweed cultivation and other ecological issues.

The ticketed series features Hindustani and Carnatic vocal and instrumental music and Bharatanatyam performances. FEA will air five 90-120 minute episodes on Shaale.com, one weekend a month, through March 2022. All episodes will be available for viewing until May 31. The line-up begins today at 7 p.m. with two concerts — Uday Bawalkar and Ramakrishnan Murthy. Tomorrow’s episodes will have Shubhada Paradkar and a duet by Aishwarya Vidhya Raghunath and Brinda Manickavasagam. Sunday will air T.M. Krishna’s concert.

To promote the series, FEA has selected nature poems in English, Tamil, Bangla, Kannada, Hindi, Sanskrit, Telugu and Marathi for the artistes to read out. The ‘Amche Mollem’ artistes are also creating hand-painted posters for each concert. The posters will be auctioned and the proceeds will go to the visual artistes.

The author writes on classical music and musicians.