Why is the Himachal government with the help of Modi magic? Congress-AAP ready to surround these big issues 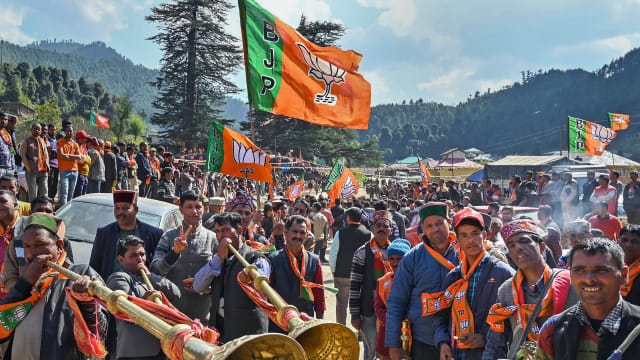 In Himachal Pradesh, the power game is going on between the Bharatiya Janata Party and the Congress for the last three decades. However, this time the BJP is trying its best to break this cycle. But in terms of political activities, the Jai Ram Thakur government of the hill state seems to be relying on Prime Minister Narendra Modi’s name more than electoral issues.

Support of PM Modi and Center
During the process of deciding the candidate, the BJP has cut the tickets of 11 sitting MLAs. It is being said that the party did this to deal with the anti-incumbency wave. However, that might not be enough. There are reports that the party is facing challenges on several issues related to governance. The party is facing allegations of poor governance.

For example, 6 Chief Secretaries have been changed in the Chief Minister’s Office in the last five years. It is being said that many initiatives of the government could not survive the scrutiny of the courts. The draft Shimla Development Plan 2041 was also put on hold by the NGT.

What can be election issues
In the Himachal Pradesh assembly elections 2022, many issues including new-old pension scheme, cost of production of sev, inflation, BJP rule, free electricity, allowance to women, cow dung purchase can play an important role. Chances are being raised that the Sev movement in the state will prove to be a big issue again after three decades. For the past few months, sev producers have been protesting against the increase in GST on cartons, rising prices of trays used inside cans. Due to this the cost of production has increased.

Announcements continue
As soon as the election atmosphere was created, PM Modi and CM Thakur had gathered in Himachal Pradesh. PM Modi is continuously touring the state. He visited the state twice in October and announced several development projects.

Congress-AAP Active
On the one hand, Congress had released its manifesto in September itself. Its 10 election guarantees included free electricity, an allowance of Rs 1500 for women in the age group of 18-60, restoration of the old pension scheme, purchase of cow dung at Rs 2 per kg. At the same time, you are talking about restoration of old pension scheme after coming to power in Himachal. The party has recently made a similar announcement in Punjab as well.

Election is also important from the point of view of statistics
In the year 2017, there was a close contest in many seats in the state. Statistics show that the margin of victory in 20 out of 68 seats was less than 3000 thousand votes. Whereas, there were 6 seats where the margin of victory was less than 1000 votes. However, then two big rivals i.e. BJP and Congress were face to face in the political battle. This time the entry of Aam Aadmi Party has also made the competition interesting.