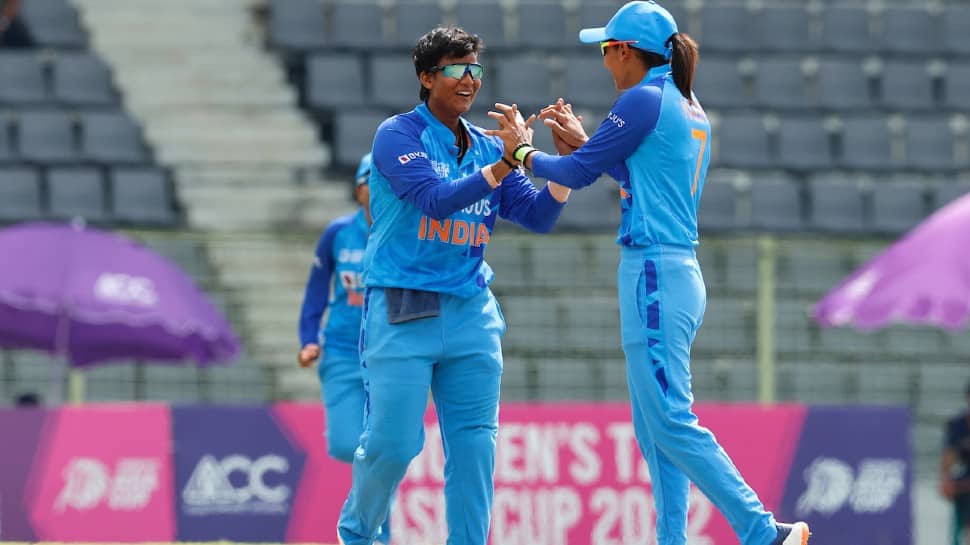 Shafali Verma’s knock of 42 followed by Deepti Sharma’s three-wicket haul guided India to a 74 runs win over Thailand in the semifinal of the ongoing Women’s Asia Cup 2022 at Sylhet International Cricket Stadium on Thursday (October 13). With this comprehensive victory, the Women-in-Blue secured a place in the final and will face the winner of semifinal 2- Pakistan vs Sri Lanka- on Saturday (October 15). The second semifinal between Pakistan and Sri Lanka will be played later on Thursday.

Chasing a target of 149 runs, Thailand got off to a bad start as Deepti Sharma dimissed Thai opener Nannapat Koncharoenkai for five runs in the third over of the innings. In the fifth over of the innings, Deepti struck again and sent Natthakan Chantham packing as the Thai batter handed an easy catch to Pooja Vastrakar at deep mid-wicket.

1 Catch@TheShafaliVerma bags the Player of the Match as #TeamIndia beat Thailand.

Deepti bagged the third wicket of the innings in her last over, dismissing Sornnarin Tippoch for five runs. After that Renuka Singh broke the Thai middle order by dismissing Chanida Sutthiruang in the 8th over of the innings.

After 15 overs, Thailand were four wickets down for 50 and kept losing wickets at regular intervals. Well-set batter Nattaya Boochatham was sent back to the pavilion, LBW to Sneh Rana for 21 off 29.

Rajeshwari Gayakwad then delivered back-to-back two blows to the Thailand team, dismissing skipper Naruemol Chaiwai for 21 and Phannita Maya for zero, leaving Thailand tottering at 72/8. In the last two overs, India bowlers restricted Thai batters from scoring runs and forced them to end their innings at 74/9 to clinch a 74 runs victory and a spot in the Women’s Asia Cup final.

Top knocks by Shafali Verma and Harmanpreet Kaur guided India to a total of 148/6 against Thailand. For India Shafali made 42 while Harmanpreet scored 36 runs. For Thailand Sornnarin Tippoch bagged three while Thipatcha Putthawong, Phannita Maya and Nattaya Boochatham scalped one wicket each.

Put to bat first, India got off to a flying start as the opening duo of Shafali Verma and Smriti Mandhana hammered Thailand bowlers all around the ground providing their team with a solid start. The duo slammed 34 runs under 5 overs. The blistering partnership came to an end when Mandhana departed after scoring 13 runs in 14 deliveries.

Shafali continued to hammer the Thai bowlers while rotating the strike at regular intervals. Jemimah Rodrigues joined the opener to keep the moumentum going. Sornnarin Tippoch gave India a big blow as she dismissed Shafali for 42 off 28, with the score at 67/2.

Richa Ghosh then came out to bat but could not do much and was back in the pavilion after scoring just two runs on the delivery of Sornnarin Tippoch.In the 18th over of the innings, Tippoch gave India another blow as she sent back well-set batter Harmanpreet, who after scored 36 runs off 30 deliveries.

Deepti Sharma then came out to bat. In the last two overs of the innings, India managed to score 16 runs for a score of 148/6.