Ye kya kara raha hi…: Dhoni said THIS to Joginder after six by Misbah in last over of ICC T20 World Cup 2007 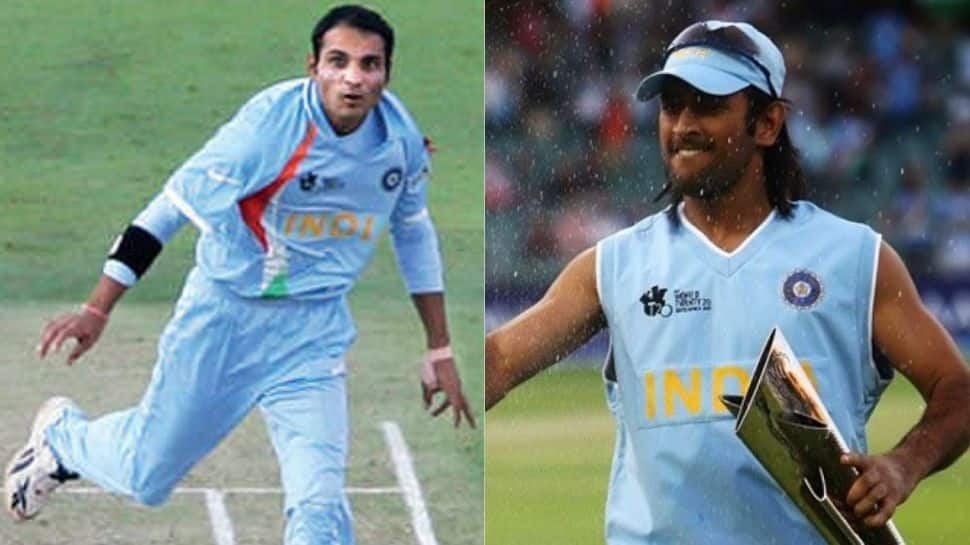 Joginder Sharma become a household name after his heroics in the ICC T20 World Cup 2007 where he bowled the last over of the final against Pakistan and helped India win the inaugural cup. India captain MS Dhoni was praised for his master stroke of going Sharma the final over ahead of veteran spinner Harbhajan Singh. In an video interview with Star Sports Sharma revealed his conversation with skipper during the last over. On this day in 2007, India captured the inaugural ICC T20 World Cup, defeating Pakistan by five runs in a thrilling final at Johannesburg.

Find out what were his thoughts before bowling ____ historic final over in the inaugural #ICC Men’s #T20WorldCup! #TeamIndia pic.twitter.com/n2dhVyjnmb
— Star Sports (@StarSportsIndia) September 24, 2022

Both the teams had a great run in the tournament heading into the final and topped their respective groups. India was coming into the summit clash after downing the mighty Australians in the semi-final by 15 runs. On the other hand, Pakistan had defeated New Zealand in the semis by six wickets.

“I was the one who had bowled the last over against Australia in the semi-final. During practice sessions, we were asked to bowl specific amount of balls as yorkers and outside off-stump and Mahi (MS Dhoni) had a lot of faith in me,” said Joginder.

The stage was set for a perfect final, with both teams high on momentum and energy of youth. India elected to bat first after winning the toss. Openers Gautam Gambhir and Yusuf Pathan got Team India to a flying start. Pathan was looking good on his debut, hitting a four and a six before being caught by Shoaib Malik on delivery by Mohammed Asif. Pacer Sohail Tanvir also sent back Robin Uthappa (8), reducing Men in Blue to 40/2 in 5.4 overs.

“(In the final) I was pretty confident and ran to bowl the last over the moment Mahi signaled. He told me not to worry about the outcome. When I bowled the first delivery, it swung and was called a wide. People assumed that I was under pressure and that’s why I bowled a wide but I was pretty happy to see the ball swing. I always felt pretty confident when the ball swung as I believed that it gave me an upper hand regardless of the batter on strike.”

Then Gambhir took things in his hand and put on a 63-run stand with Yuvraj Singh. The Delhi batter took bowlers to cleaners while Yuvraj played the anchor, in contrast with his performance against Australia where he smashed 70 off 30 balls. The stand was ended by pacer Umar Gul in the 14th over, dismissing Yuvraj for 14. He also got captain MS Dhoni quickly for just six runs. India was in trouble at 111/4. Gambhir had hit his half-century but was dismissed for 75 off 54 balls by Gul, who got his third wicket of the match. India was at 130/5 in 18 overs. Then Rohit Sharma’s quickfire 30* off 16 balls helped Team India reach 157/5 in 20 overs. Gul (3/28), Asif and Tanvir got one wicket each.

“The next ball was a dot and I got hit for a six on the second ball. Dhoni walked up to me again and I told him that there’s nothing to worry, if there’s a change in strike then I’ll get rid of the other batter. Misbah was already positioned to play a scoop on the leg-side, while I was still in my follow through thinking that I’ll try to bowl a yorker outside off. But I changed my strategy and pulled my length back and cut down on pace. The ball didn’t hit the meat of his willow and Sreesanth settled under it and took the catch.”

Chasing 158, Pakistan lost the opener, Mohammad Hafeez, for just 1. Kamran Akmal was trapped for a duck by RP Singh, who got his second wicket of the match. Imran Nazir kept the one end steady, but was himself run out by Uthappa for 33 off 14. With this, Pakistan was at 3/53 in 5.4 overs.

Miseries continued for Pakistan as wickets kept falling. Younis Khan (24), captain Shoaib Malik (8), Shahid Afridi (0) left without making much impact. Pacers Joginder Sharma and Irfan Pathan helped India solidify its winning position in the match, leaving arch-rivals at 6/77. Misbah-ul-Haq kept one end steady despite wickets falling from the other end. He smashed Harbhajan for three sixes in the 17th over while Sohail Tanvir smashed Sreesanth for two sixes in the next one.

This brought the equation to 13 off 6 balls. Joginder had to bowl the last over. He started off with a wide and was hit for a six on the third ball. But then on the fourth ball, Sreesanth took a final catch at the short fine leg to dismiss Misbah for 43 off 38 balls, bundling out Pakistan for 152.

India had won the match by five runs and the World Cup as well. Irfan Pathan (3/16) and RP Singh (3/26) produced match-winning spells. Joginder Singh (2/20) also starred in India’s win. Since then, India has not captured another T20 World Cup. Their best performances since then remain runner-up finish in the 2014 edition and semifinal finish in the 2016 edition of the tournament.